ARCHIVED – Where does Canada’s gasoline come from? 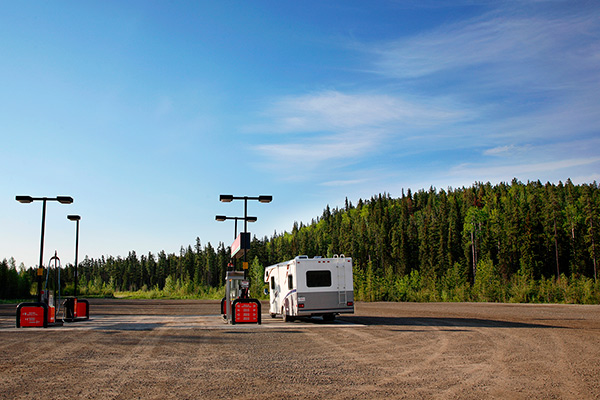 There are 14 gasoline-producing refineries in Canada (17 refineries in total): 6 in western Canada, 4 in Ontario, 2 in Quebec, and 2 in the Atlantic Provinces. Although production varies by refinery, gasoline comprises the largest portion of refinery output at 36%, on average. Refineries also produce a number of other refined petroleum products (RPPs) including diesel and jet fuel.

Terminals serve as receipt and distribution points for domestic and imported gasoline, and decide wholesale pricing for local markets. Due to the relatively small volumes demanded by individual and dispersed facilities, transportation of gasoline from terminals is done almost exclusively by truck.

After gasoline is purchased at local gas stations and bulk storage plants, it powers personal and freight transport vehicles, and other industrial machinery. In 2018, domestic sales of motor gasoline totaled 46 billion litres, and represented 42% of total domestic RPP sales.

In 2018, Canadians consumed 46 billion litres of gasoline. The first step in meeting this demand is the extraction of crude oil from domestic and international production areas. Oil is transported to a refinery where it is produced into a number of chemically distinct products, including gasoline. From refineries, gasoline is transported to terminals near population centres. There, it is stored and blended with brand-specific performance and efficiency-enhancing additives, as well as ethanol according to government regulations. From terminals, gasoline is transported by truck to thousands of gas stations across the country.

The vast majority of this process occurs in Canada and by Canadian companies; however, in 2018, imports of oil represented 46% of Canada’s refinery inputs, and imports of refined gasoline amounted to 7.9 billion litres.

In many cases, a single company will control multiple aspects of its supply chain, managing oil production and refining operations, as well as owning, operating, or contracting with distribution terminals and retail stations. This is called vertical integration. Many of Canada’s major refiners – including Imperial Oil, Shell Canada, Suncor Energy, and Husky – are vertically integrated. Some refiners such as Irving Oil, Federated Co-op and Valero do not have crude oil production, but operate distribution terminals and retail stations.

All gasoline comes from crude oil. In Canada, most domestic oil production happens in the WCSB, which covers almost all of Alberta, as well as parts of Saskatchewan, Manitoba, British Columbia, Yukon, and Northwest Territories. Outside of the WCSB, production off the coast of Newfoundland and Labrador contributes to approximately 5% of Canada’s domestic production. Crude oil imports occur primarily in Ontario, Quebec, and the Atlantic Provinces, and comprised 46% of Canada’s total refinery inputs in 2018.

Logistical and economic factors determine where refineries source their crude oil, and the complexity of each refinery dictates which types of oil it can process. Refineries in western Canada process exclusively domestic oil due to their proximity to inexpensive WCSB production. These refineries process more oil sands synthetic crude and bitumen than refineries elsewhere in Canada. The westbound Trans Mountain and southbound Plateau pipelines supply crude from the WCSB to refineries in Burnaby and Prince George, respectively. 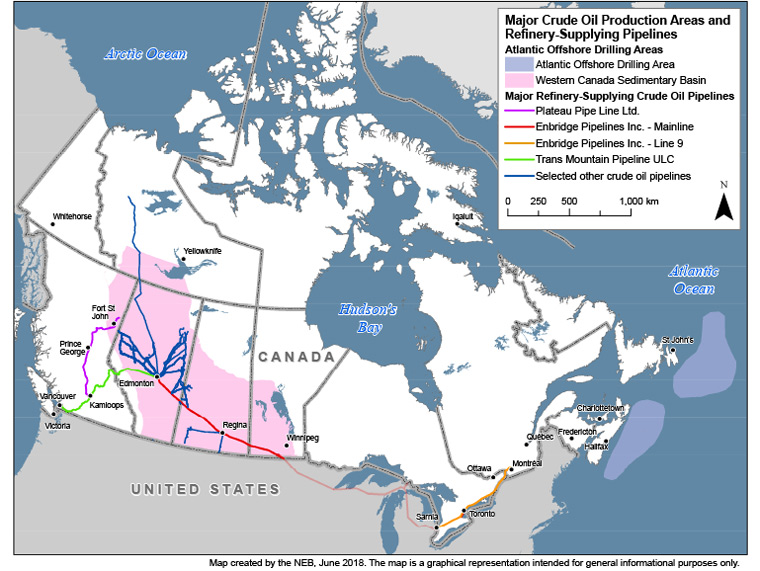 Refineries in Ontario process a more diverse crude slate, supplementing domestic WCSB crude with United States (U.S.) imports, primarily from North Dakota and Texas. These refineries process much more conventional light and medium crude than in western Canada, and less oil sands synthetic crude and bitumen. Domestic crude is transported from the WCSB to refineries near Sarnia and Nanticoke via the Enbridge Mainline and Line 9 pipelines.

Along Line 9 from Ontario to Quebec, transportation from the WCSB becomes more expensive, and imports of crude oil by marine vessel are more attractive for refiners. Despite having slightly less refining capacity than Ontario, Quebec imported around three times more oil than Ontario in 2018. These imports, mostly from the U.S. and Algeria, supplement domestic supply to Quebec refineries via Line 9. Quebec’s refineries process almost entirely light, medium, and synthetic crude.

Complex refining processes break down the crude oil by separating light and heavy hydrocarbons. This results in a number of chemically distinct RPPs such as gasoline, diesel, jet fuel, and other fuels. Gasoline accounts for the largest portion of RPP production at Canadian refineries at 36%, followed by diesel and middle distillates (such as light fuel oil) at 33%. Despite comprising only slightly more than a third of total refinery production, gasoline has the greatest impact on the daily lives of most Canadians. 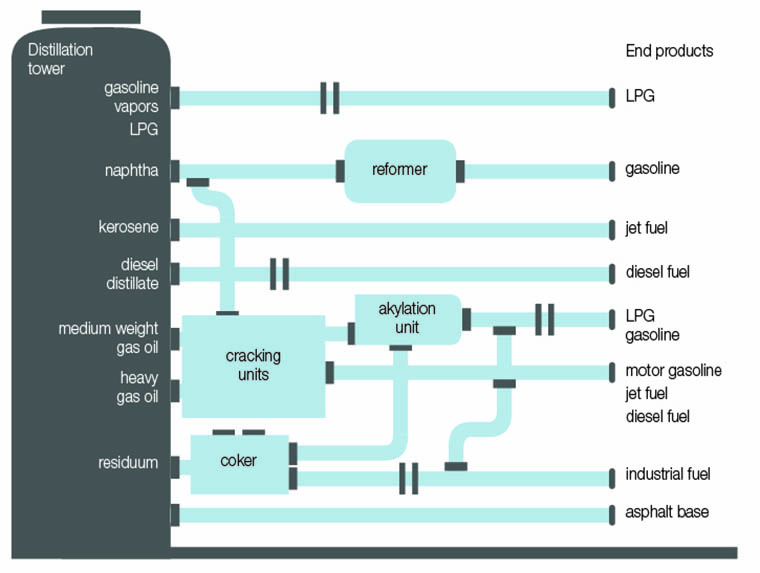 In general, refineries and their domestic markets tend to be highly localizedFootnote 3. Refineries in western Canada supply gasoline to western Canadian markets, from Vancouver Island to northwestern Ontario, as well as to Canada’s northern territories. Ontario refineries supply Ontario as far east as Ottawa. The Ontario market also receives RPPs from refineries in Quebec, although the main markets for Quebec refineries are east along the St Lawrence River, including Montreal and Quebec City. Refineries in New Brunswick and Newfoundland and Labrador supply the Maritime Provinces, and occasionally Nunavut. 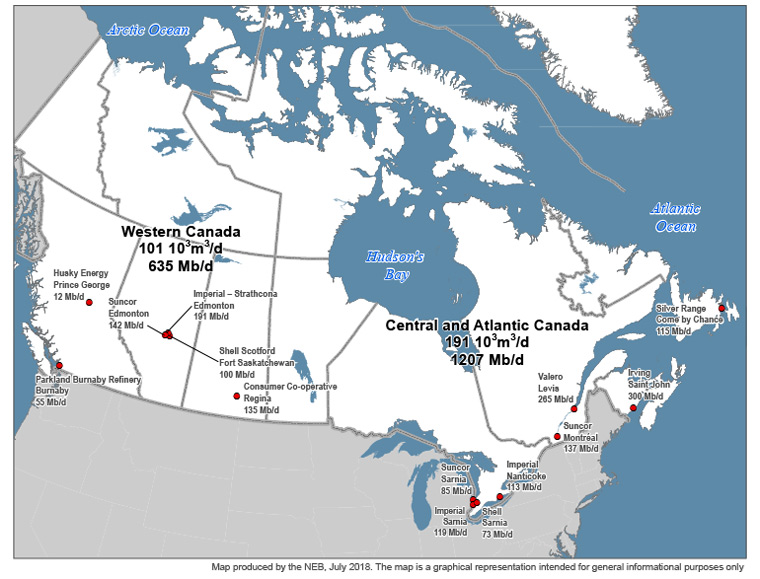 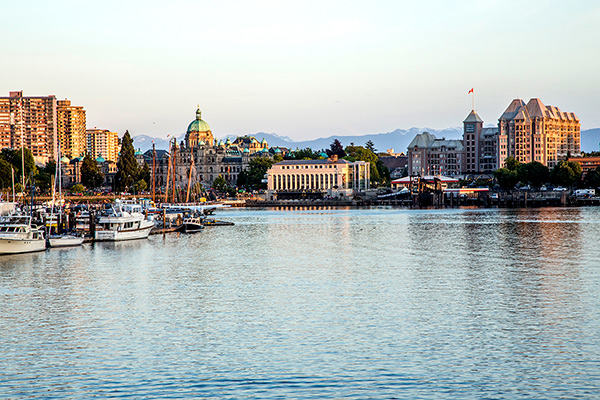 Gasoline is transported from the refinery to primary storage tanks, which are located at or near the refinery. From there, gasoline is transported to distribution terminals near major markets. Terminals are strategically located near gasoline demand centers across Canada. They function like batteries that can be drawn on by local retail stations and bulk storage plants, which in turn supply industry and the public. Many major markets for gasoline, including Vancouver, Calgary, Saskatoon, Winnipeg, southern Ontario, and Montreal, connect directly to refineries by pipeline. Along Canada’s Coasts, as well as in the Great Lakes and St. Lawrence regions, many terminals can be supplied by barge. Inland, rail shipments supply major terminals.

At terminals, retailers blend their gasoline with proprietary blends of performance and efficiency-enhancing additives, as well as with ethanol, according to federal and provincial renewable fuel requirements. As regional distribution centres, terminals are used as reference points for pricing at gasoline retail stations. Many terminal operators, including Petro-Canada, Shell Canada, and Valero, post their wholesale, or “rack”, prices publicly. Rack prices factor in costs incurred throughout the supply chain, including the price of crude oil, refining margins, and costs of transportation to the terminal, including tolls on gasoline-carrying pipelines. Aside from a relatively small marketing margin applied by the retailer, the entire cost of production (including profit margins) is included in the rack price. Government taxes applied at the pump comprise most of the difference between rack prices and pump prices.

As of 2017, there are 78 terminals registered with Environment and Climate Change CanadaFootnote 4. All terminals in Canada have truck-offloading capacity, and some also have capacity to offload onto ships, railcars, or even pipelines. Logistically, tanker trucks are the most practical and economical way of getting gasoline to retail stations, because they allow for flexibility in both the volume and destination of each shipment. In the Atlantic Provinces, many terminals also have marine offloading capabilities, which allow them to supply smaller towns along the coast.

The Kent Group’s National Retail Petroleum Site Census reports 11 948 retail gasoline stations in Canada as of 2017. Many of these are controlled by major oil companies and integrated refiner-marketers and sell their respective brands of gasoline. Many other independently-controlled retail stations contract to sell the same well-known brands. To illustrate this, the Kent Group reports that 39% of gas stations across Canada carry Suncor, Esso, or Shell brands of gasoline, while 11% of all stations are price-controlled by these companies. Overall, Canada’s seven integrated refiner-marketers determined prices at 23% of gas stations.

Just as Canadian refineries process both domestic and imported oil, gasoline terminals import gasoline in addition to domestic supply. Although Canada is a net exporter of gasoline, some imports are required to meet local demand due to differences in regional production. Quebec generally imports the most gasoline, much of which is subsequently shipped to Ontario. The Atlantic Provinces and British Columbia are the next largest importers of gasoline. The Yukon occasionally imports gasoline from Alaska. The European Union (E.U.) and the U.S. are both large sources of these imports. In 2017, the E.U. exported 5.0 billion litres to Canada, and the U.S. Energy Information Administration reported 1.2 billion litres of finished motor gasoline exports to Canada.

Transportation in Western and Northern Canada 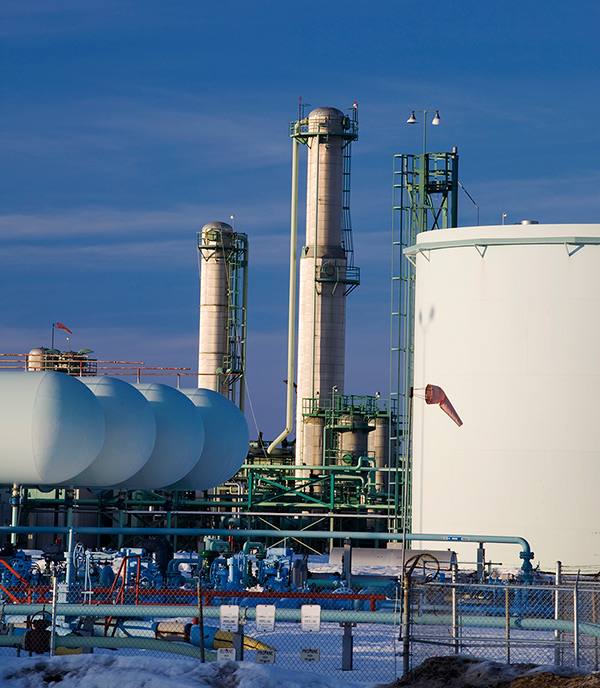 Three major pipelines connect Edmonton, the hub of western Canadian gasoline production, to major metropolitan areas in British Columbia and the Prairie Provinces. The southbound Alberta Products Pipeline carries gasoline destined for terminals in Calgary. The Trans Mountain pipeline runs west, supplying terminals in Kamloops and Burnaby, British Columbia. Eastbound, the Enbridge Mainline carries gasoline to terminals in Regina, Saskatchewan, and as far as Gretna, Manitoba. Drawing from the Enbridge Mainline, the Saskatchewan Pipeline transports gasoline from Milden, Saskatchewan, to terminals in Saskatoon, and the Winnipeg Products Pipeline from Gretna to Winnipeg, Manitoba.

Edmonton refineries are also connected by rail and truck to smaller terminals in Alberta. The only registered terminal in Canada’s northern territories is located in Hay River, Northwest Territories, and connects to Edmonton by rail.

Regina’s Co-op Refinery supplies small terminals across Saskatchewan, as well as in Alberta and Manitoba via rail and truck. The refinery also ships gasoline on the Enbridge Mainline to Manitoba.

Some retail facilities in Nunavut receive supply by ship from the Atlantic Provinces, as well as from the U.S. and overseas. The Yukon occasionally imports gasoline from Alaska. Aside from this, western and northern Canada as a whole is largely self-sufficient in its supply of gasoline.

As of 2017, there are 29 terminals in western Canada and one in northern Canada registered with Environment and Climate Change Canada. 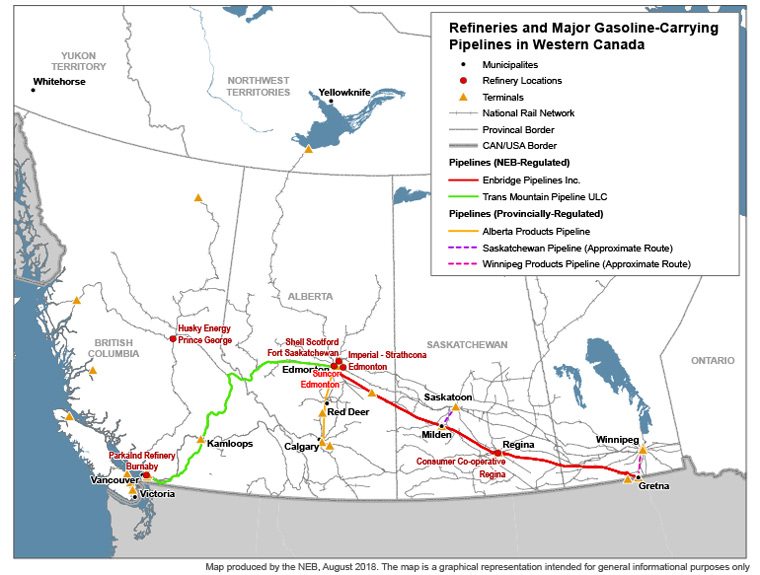 Transportation in Central and Atlantic Canada

The Sarnia Products Pipeline and Sun Canadian Pipelines connect refineries in Sarnia to terminals in London, Hamilton, and Toronto. The bi-directional Trans-Northern Pipeline flows north from the Nanticoke refinery, supplying Oakville, Mississauga, and Toronto; and south from Montreal to Toronto and Ottawa. Quebec’s easternmost Jean-Gaulin refinery connects to a terminal in Montreal East via the St Laurent Pipeline, as well as by rail.

Most storage terminals in Ontario are supplied by pipeline; significant volumes are also moved by ship and rail, and some small shipments by truck. Marine terminals at the Jean-Gaulin refinery and in Montreal supply most terminals around Quebec. Nearly all terminals in the Atlantic Provinces are supplied by ship from the Saint John and Come by Chance refineries, with small volumes transported by rail and truck. Atlantic refineries also occasionally supply gasoline by ship to terminals in Nunavut.

As of 2017, there were 21 terminals in Ontario, 11 in Quebec, and 16 terminals in Atlantic Canada registered with Environment and Climate Change Canada. 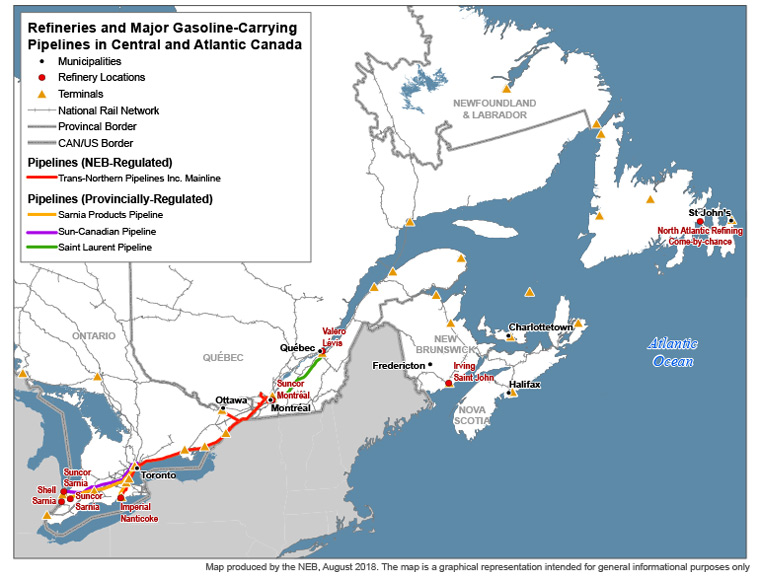 The retail price paid at the pump consists of the following major components:

New Brunswick sources some of their supply from the WCSB by rail.

Although some refineries also serve export markets, the portion that stays in Canada is generally consumed locally.

The Canadian Environmental Protection Act (CEPA) classifies terminals as “Petroleum Product Wholesaler-Distributors”, and requires that they report to the National Pollutant Release Inventory (NPRI). The information collected here is used in evaluating sources of pollution in Canada.