What is a Refinery?

A refinery processes crude oil into RPPs such as gasoline, diesel fuel, jet fuel, and heating oil, as well as liquid petroleum gases (LPGs) such as propane and butanes. Approximately 80% of the products produced in a refinery are used to either move people and goods, or keep people warm. The other 20% includes inputs into the petrochemical industry, as well as kerosene and stove oil, asphalt and lubricating oil and greases, to name a few.

Crude oil is a mixture of many individual hydrocarbons, each of which have a unique boiling point. This property is the basis for separating the components in the distillation process, the first and most important process in the refinery.

In the first step of the refining process, crude oil is heated in a large furnace, where most of the oil boils off into a gas. The liquids and vapours are then discharged into distillation units which are specifically designed vertical towers that separate and collect fractions of crude oil components with similar boiling points. Because heavier hydrocarbons have higher boiling points than the lighter hydrocarbons they tend to fall to the bottom of the column in liquid form. At the same time, lighter components tend to rise in gaseous form to the cooler top end of the column. Components that boil somewhere in between are collected and withdrawn from the distillation tower at intermediate points in the column. 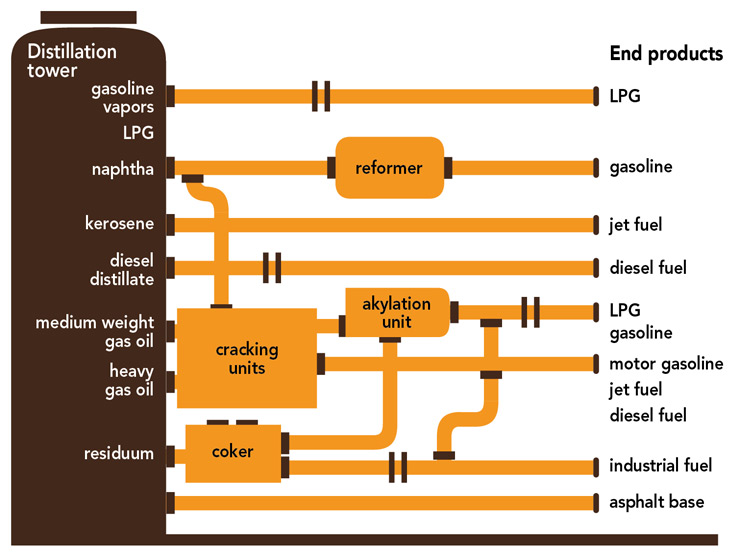 After distillation, the heavier products can be processed in a variety of ways, all with the objective of increasing the refinery yield of higher value, lighter products like gasoline and diesel. Cracking breaks down heavier streams from the distillation process into lighter components, and is the most important conversion process in a modern refinery. It turns heavier crude oil fractions (which would otherwise have to be sold at a discount to crude) into blending components for finished products. Other refinery processes, including alkylation and reforming target improvement in the quality of specific crude oil fractions. Not all refineries have coking units, but those that do are able to process even the heaviest distillation fraction from crude oil (commonly called residue), into lighter fractions for subsequent processing and blending.