Canadian refineries have different characteristics depending on their location. Generally, refineries are located on major waterways, near major cities or near crude oil production. Being on a major waterway gives a refinery access to offshore crude oil as well as export market access for its RPPs. Being close to a large city provides a market for its RPPs and lowers the cost of transportation. Being close to crude oil production gives a refinery ample local supply at low transportation costs.

As a result of the 1973 Organization for Petroleum Exporting Countries (OPEC) embargo, the Government of Canada, concerned about the potential vulnerability of central Canadian refineries which imported crude oil, asked Interprovincial Pipeline (IPL, now Enbridge) to extend its pipeline system from the Toronto area to Montreal. In 1975, the Government entered into an agreement with IPL to construct an extension from Sarnia to Montreal. The Line had a capacity of 50 103m3/d (315 000 b/d).

Between 1976 and 1997, Line 9 supplied refineries in Ontario and Quebec with western Canadian crude oil via Sarnia after being shipped through the U.S. In 1999, because of increased global oil supply, Line 9 was reversed allowing overseas crude oil (which was already being imported at Portland, Maine and transported on the Portland-Montreal Pipeline to Montreal refineries) to be shipped further westward on Line 9 to reach refineries in Ontario. During that time, Line 9 had a capacity of 38 160 m3/d (240 000 b/d).

In 2011, with lower North American crude oil prices relative to imported crude oil, the line was underutilized and Enbridge applied to the Board to re-reverse a section of the pipeline between Sarnia and North Westover, Ontario. In 2013, the first phase of the Line 9 reversal was completed, allowing transport of North American crude oil to more refineries in Ontario. In 2012, Enbridge filed an application with the Board to reverse the remaining section of Line 9, between North Westover and Montreal and expand the capacity to 47 700 m3/d (300 000  b/d). Since 2015, growing supplies of western Canadian and U.S. crude oil have been reaching refineries in Quebec. 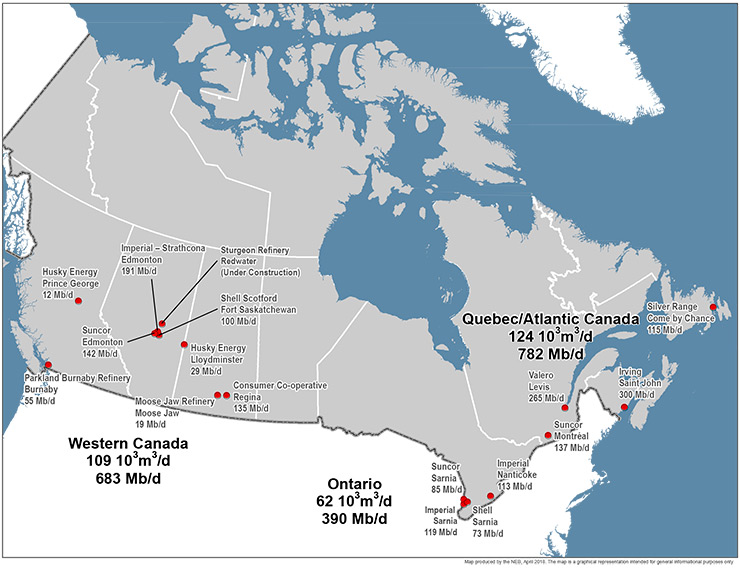