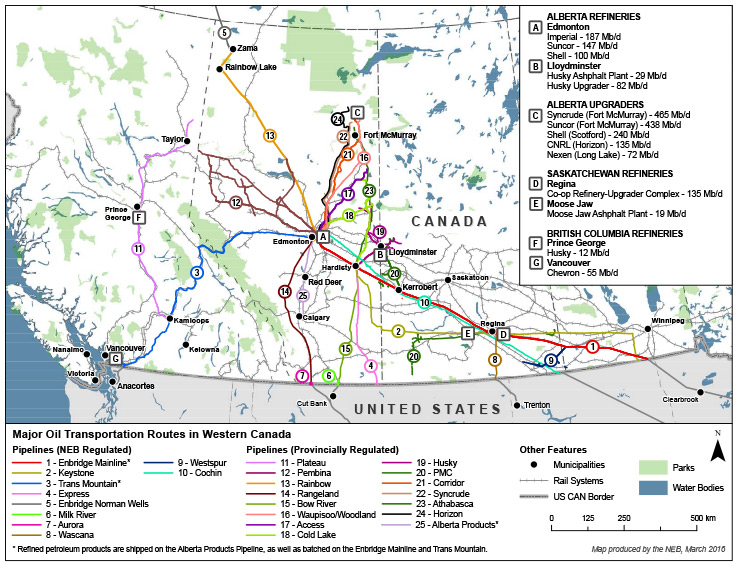 Refineries in Alberta and B.C. process more oil sands crude, synthetic and bitumen, than other refineries in Canada. (Figure 12) B.C. refineries source crude oil from B.C. as well as from Alberta on the Trans Mountain Pipeline.

Western Canada is connected with refined product pipelines. Within Alberta, RPPs are transported from Edmonton on the Alberta Products Pipeline to the southern part of the province. Refined petroleum products are transported to B.C. via the Trans Mountain pipeline and to Saskatchewan, Manitoba and northwestern Ontario on the Enbridge Mainline.

However, Alberta has limited access to RPP imports. In general, the Prairie Provinces cannot easily meet their RPP demand in the event of a disruption because they do not have the capacity to bring in large quantities, by pipeline or other means, from other regions.

In the past, Atlantic Canada and Quebec were not well connected to domestic crude oil production. Until recently, all of these Canadian refineries imported crude oil to meet their needs. With the reversal of Line 9 and more rail capacity, Quebec refineries now process some western Canadian crude oil and are less exposed to international crude oil market fluctuations. 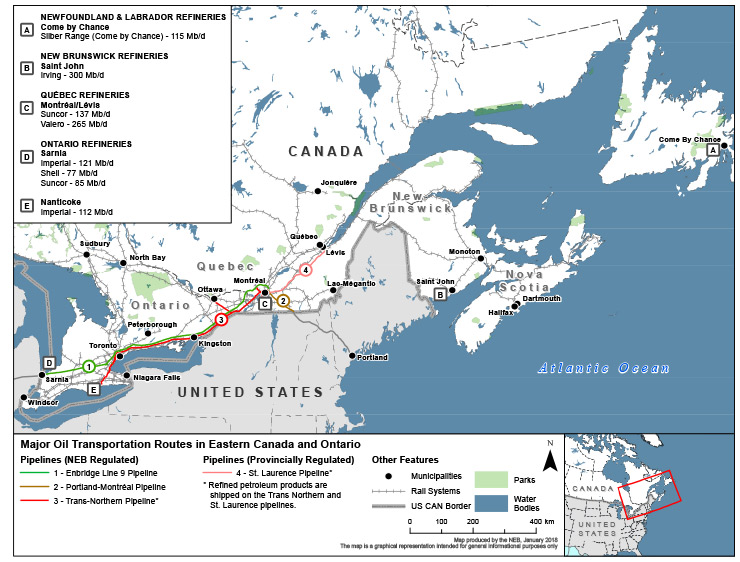 Ontario refineries process both western Canadian crude oil and imports. Almost 60% of the crude oil processed in Ontario is light crude. (Figure 14) Refining costs can be higher in Ontario due to this larger proportion of higher cost light crude, as well as added transportation costs given the distance between Sarnia and large producing areas.

Since the reversal of Line 9 back to its eastward flow, more crude oil has been sourced from the U.S. (Figure 15) 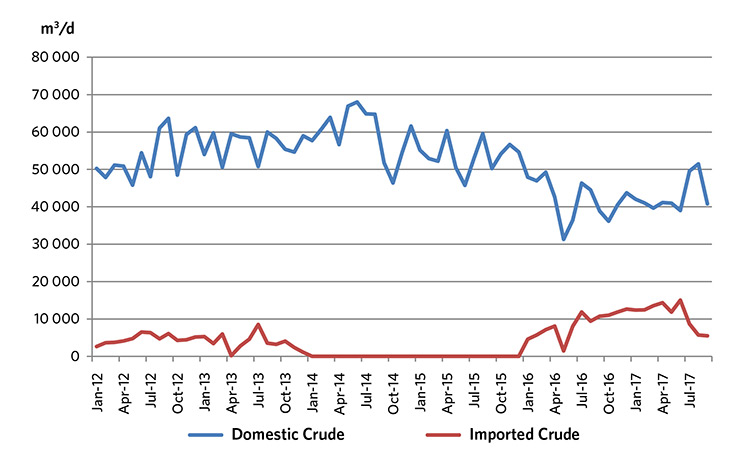 Access to tidewater allows refineries in Quebec and Atlantic Canada to have a more diverse crude oil supply than those in Ontario and western Canada, as well as access to markets for their RPP exports. In 2013, the Board approved the reversal and expansion of Line 9B, between North Westover, Ontario and Montreal, Quebec, so that crude oil could flow from west to east all the way to Montreal [Filing A59170]. This gave refineries in Quebec a pipeline connection to western Canadian and U.S. crude oil supply and reversed all of Line 9 to its original direction.

The Pipeline Saint-Laurent, links the Jean Gaulin Refinery operated by Valero in Lévis near Quebec City to the terminal in Montreal East, supplying the Greater Montreal area with large volumes of RPPs such as gasoline, diesel, heating, oil and jet fuel. In addition, Trans Northern Pipeline transports RPPs from Quebec to Ontario.

The Irving Refinery in Saint John, New Brunswick is the largest refinery in Canada, and exports considerable volumes of RPPs to the U.S. The Irving refinery is unique compared with other refineries because it is a family-owned operation with no crude oil production, and a refining and marketing arm.

Eastern Canada imports significant volumes of crude oil to meet its refining needs. Each province, Newfoundland and Labrador, New Brunswick, Quebec, and Ontario has a diverse crude slate, with imports in some cases coming from several different countries.

New Brunswick has the most diverse crude slate. In 2017Footnote 4, Saudi Arabia accounts for almost 40% of New Brunswick’s crude oil imports, followed by Azerbaijan, the United Kingdom, the U.S. and Nigeria.

Quebec receives over 60% of its crude oil imports from the U.S. with lesser volumes from Algeria. U.S. imports have grown with the reversal of Line 9B.

Ontario receives all of its crude oil imports from the U.S. Most of the U.S. imports come from the states of Texas, North Dakota and Indiana. 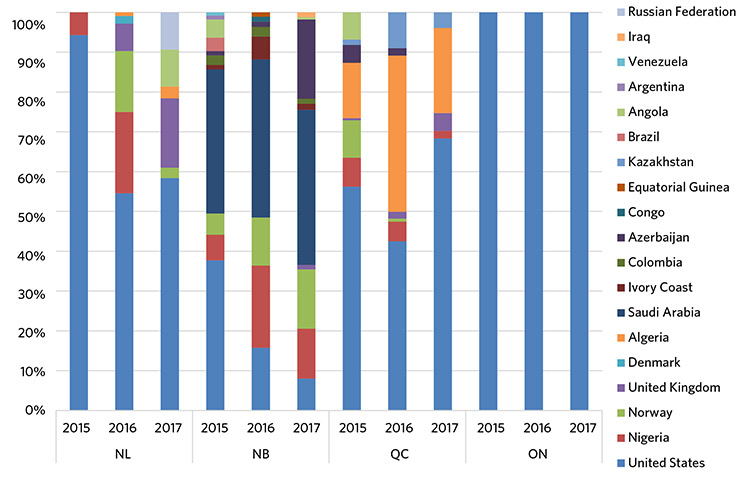 Due to confidentiality rules, Saskatchewan is not included. Average Year-to-Date July 2017.

Due to confidentiality rules, only Quebec data is available.