If you are new to the NEB’s process, our mandate and hearing process, you may want to:

On this page you can find:

In its project application [Filing A81054], Manitoba Hydro is proposing to construct and operate a 500 kV alternating current international power line (IPL) extending from Manitoba Hydro’s Dorsey Converter Station in Manitoba to the international boundary between Manitoba and Minnesota (Dorsey IPL). The Dorsey IPL will connect with the Great Northern Transmission Line, a new 500 kV transmission line in the United States.

The construction of the Dorsey IPL and the associated alterations to Manitoba Hydro’s existing transmission facilities is collectively known as the Manitoba-Minnesota Transmission Project (MMTP).

This map provides an overview of the project. 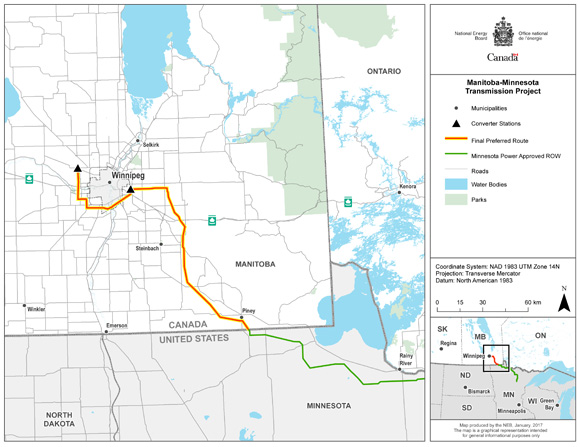 Participant funding is available. Refer to the Participant Funding Program page for information on deadlines, eligibility, how to apply for funding, and how to submit claims.

The Process Advisor’s role is to support the public (e.g., landowners, concerned citizens, environmental non-governmental organizations) and Aboriginal groups if they have questions about the NEB’s assessment of the project.

If you have questions about the project, including whether or not the power line could cross your property, please contact the applicant.