It is challenging to predict exactly how the energy transition will unfold in Canada. Canada’s transitioning energy system may involve familiar methods of energy used in new ways. For example, using fossil fuels in more efficient ways, and developing more renewable sources of electricity for powering end-uses. The transition may also involve entirely new energy systems, such as advanced biofuels and electrolysis for hydrogen production. The pace of the transition will also place pressure on governments to develop regulations for new technologies as they emerge.

This section explores the current energy transition in a few ways. First, it looks at how past developments have influenced future expectations. This underscores that change from current perspectives should be expected. Second, it looks at what a low-carbon energy transition might mean for Canada’s current energy systems. Finally, this section explores possible future energy systems.

Chapter 5 described examples of the energy transition in Canada using historical data. Another way that current transitions can be measured is through how they have influenced future expectations. Over the last decade, many policy and technology trends have altered outlooks for energy supply and demand in Canada and beyond.

These changes have had significant implications for future perspectives on energy. Baseline energy supply and demand scenarios from BP and the IEA are projecting oil and coal demand either slowing considerably or peaking before 2040. Wind and solar PV, previously considered fringe energy sources or too expensive to compete with more traditional sources of energy, are now cost competitive with natural gas-fired generation.Footnote 56

The outlook for energy demand in Canada has changed considerably over the past decade too. The NEB’s Canada’s Energy Future (EF) report examines supply and demand fundamentals for Canadian energy under various scenarios. Figure 18 illustrates baseline (“Reference Case”) projections of primary energy demand mix by fuel for 2030 from projections made in 2007 and 2018. These projections trace how expectations of energy demand in Canada have evolved over the past decade. Most notably, the projection for 2030 demand for refined petroleum products has changed from 7 481 PJ in 2007 to 4 764 PJ in 2018. 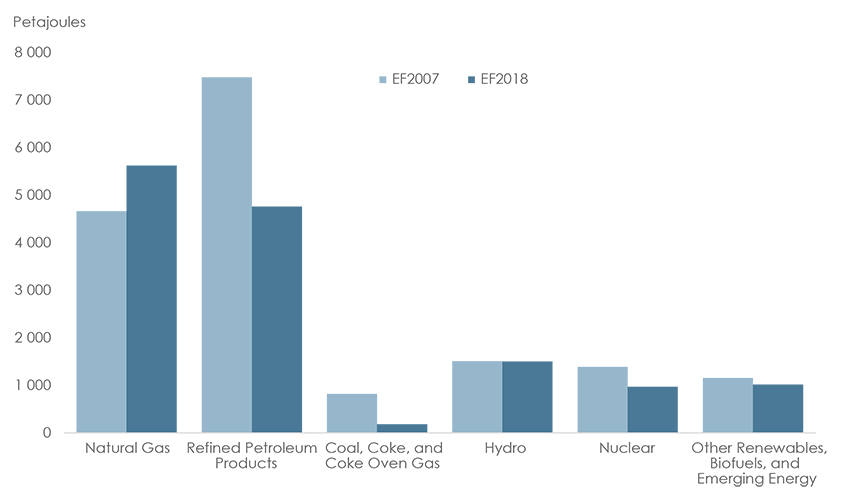 The EF2018 Reference Case projects a very different energy system in Canada in 2030 from the EF2007 Reference Case. In brief, these differences are:

While Figure 18 compares baseline Reference Case outlooks, it is also interesting to compare actual data against alternative scenarios. EF2007 included a scenario that balanced energy, environment, and economic outcomes (the “Triple E” scenario). This scenario envisioned a policy and technology push in Canada towards a lower carbon energy system. Figure 19 traces primary energy demand by fuel type from 2005 levels to 2017 actuals, and compares them to EF2007 Reference Case and Triple E projections. The graph shows that coal and oil demand followed the Triple E pathway more closely, while natural gas use followed the Reference Case pathway more closely. Renewable and non-emitting is moderately lower than projected, as declines in nuclear and industrial biomass offset growth in solar, wind, and transportation biofuels.

Moving to a Low Carbon Future

EF2018 shows various possibilities for future energy supply and demand. The EF2018 Reference Case reflects many of the transitions previously discussed in this report. Energy use is expected to slow relative to historical growth in all scenarios. This change in energy use is driven by energy efficiency improvements, technology, policy, and economic factors. 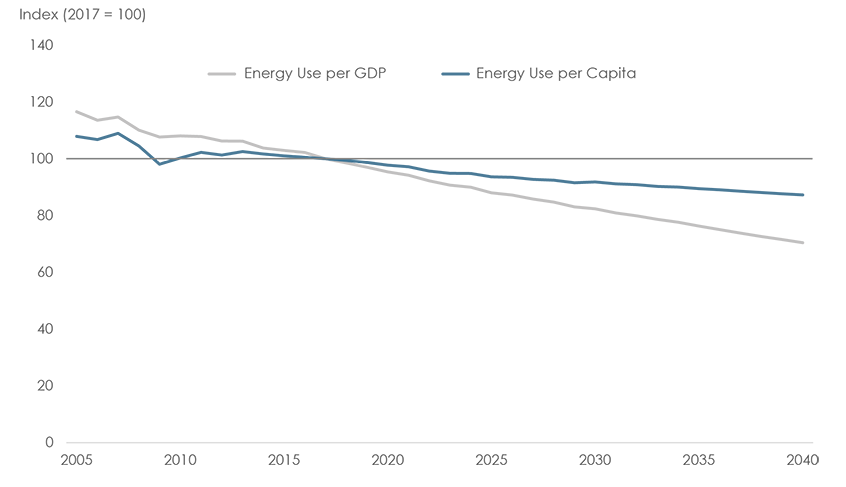 Similar to EF2007’s Triple E scenario, EF2018’s “Technology Case” explores a scenario where a global move towards reduced GHG emissions is driven by stronger policies and a faster adoption of low-carbon technologies. This scenario has significant implications for Canadian energy systems, as illustrated in Figure 21. Under the Technology Case, Canada is projected to use 30% less fossil fuels than current levels by 2040. With real GDP assumed to grow by 50% between 2017 and 2040, fossil fuel use per GDP falls by 53% in the Technology Case versus a 30% decline in the Reference Case. The phase out of coal in Canada by 2030 and the further adoption of carbon sequestration technology reduces the emission intensity of the remaining fossil fuel mix. This implies that emissions will fall even faster than fossil fuel use. 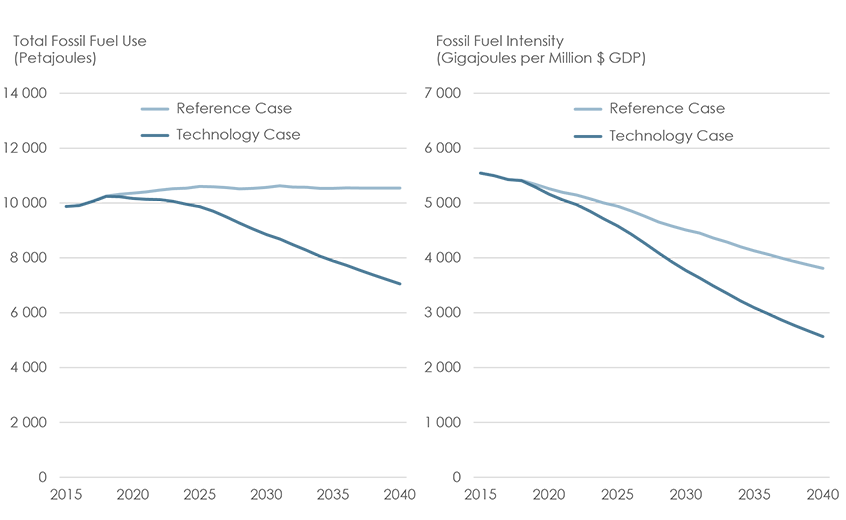 The Technology Case is not a prediction or recommendation of certain policies, technologies, or outcomes. Rather, it is a scenario that looks at the effects of an accelerated transition towards a low-carbon economy on energy demand and supply for Canada.

Canada’s only official analysis of emissions performance and performance against climate commitments is published by ECCC. ECCC’s “Pathway to Canada’s 2030 Target” projects that measures under the Pan-Canadian Framework would result in an emissions reduction of 175 MT of CO2e by 2030. This represents a 23% reduction from Canada’s 2005 level of emissions – a shortfall of 44 MT. ECCC notes that its 175 MT estimate does not include emissions reductions that would result from other Pan-Canadian Framework commitments, such as investment in public transit, green infrastructure, innovation, and clean technologies. ECCC notes that these additional measures would put Canada on track to meet its Paris Agreement commitments.

EF2018’s Technology Case projects considerable progress towards a lower-carbon economy in Canada compared to past trends. However, it represents just one possible pathway towards a lower-carbon economy.Footnote 59 It is uncertain what the ultimate pathway will be. A shift towards the aspirational 1.5 degrees Celsius targetFootnote 60 in the Paris Agreement likely means an even faster and more drastic shift away from current trends by 2040. Importantly, Canada’s 2030 emissions target, and the 2040 horizon for the EF projections, only represent milestones in a longer transition. As noted in the IEA’s “Sustainable Development Scenario”, these 2040 projections only get the world on track for necessary emission reductions and imply further, and likely deeper, reductions beyond 2040.

In the Canadian context, several studies have looked at deep emission reductions by 2050 and beyond. These include the Deep Decarbonization Pathways Project (DDPP), the Institut de l’énergie Trottier, and ECCC’s Mid-Century Strategy.Footnote 61 The DDPP and Trottier reports illustrate that deep emission reductions are technically possible and will involve drastic changes to Canadian energy systems and the economy. The DDPP report cites Canada’s preparedness for deep decarbonization as “mixed”—while Canada is on the right path for electricity, buildings, and personal transportation; challenges remain with the decarbonization of heavy industry and oil and gas extraction.

In scenarios that show decarbonizing energy systems, fossil fuels continue to play an important, but declining, role in the global energy mix. For example, the IEA’s 2018 Sustainable Development Scenario shows that by 2040, global coal demand is less than half of current levels, global oil demand is 25 million barrels per day less than today, and natural gas use is higher than current levels (although lower than their baseline “New Policies Scenario”).Footnote 62 Analysis from DDPP and Trottier shows that even in deep decarbonization scenarios, fossil fuel use remains in certain sectors where alternatives are more costly or technologically more difficult.

There is an important trade-off between the pace of transition in the near term and the longer-term need for negative emissions technology. Footnote 63 An important dynamic in many decarbonizing scenarios is that the longer it takes to switch away from emitting energy sources, the greater the need for negative emissions in the longer term. For example, the Shell “Sky” scenario shows the globe getting to net-zero emissions by 2070, and removing approximately net 10 000 MT of CO2 per year to 2100 in order to keep global temperatures at levels consistent with the Paris Agreement.

Energy Systems of the Future

Projections of future energy supply and demand, even in scenarios such as the EF2018 Technology Case, are often grounded in current energy system realities. Energy systems are complex and it can be difficult to imagine how disruptive demand side or supply side changes will be. It is possible that new energy systems will emerge in Canada’s energy transition. Likewise, disruptions in energy use could affect Canada’s energy transition as well.

Table 3 provides an overview of several potential energy systems that are largely still in the research and development phase. Significant breakthroughs and cost reductions could lead to one or more of these individual systems increasing in the energy mix. There are a variety of energy options, some of which have been discussed for many years but currently have limited commercial implementation. If these technologies gain traction, they may provide alternate pathways in a transition towards a lower carbon future. Barriers to the adoption of these systems include costs, proven performance at a commercial scale, available feedstock, land-use implications, and infrastructure requirements.

Table 4 provides several examples of potential changes that could occur to end-use demand. Future energy systems will involve connections between the changes too.Footnote 64 For example, the outcome on energy systems from autonomous vehicles could be quite different if EVs continue to gain ground relative to conventional-fuelled vehicles. Likewise, a large uptake of EVs would look different if accompanied by greater solar PV adoption. The advent of new digital technologies to manage electricity supply and demand more efficiently could further affect how energy systems are changed by autonomous vehicles and EVs.

The increased role of electrification will also likely involve a modernized electricity grid. Through its analysis of increased digitalization and energy, the IEA notedFootnote 65 that electricity is the key sector for transforming energy systems in four key areas:

The Pan-Canadian Framework supports the modernization of electricity systems in Canada. The Framework includes funding for projects that help electric systems use renewable energy better, expand renewable capacity, and facilitate the integration of energy storage for renewables.

It is important to note that the EF2018 Technology Case is strictly focused on Canada. Since climate change is a global issue, it is difficult to assess global climate implications without undertaking an integrated global climate modelling exercise. This type of modelling is beyond the scope of this report.

Negative emissions occur when more GHGs are removed from the atmosphere than emitted, for example by employing bio-energy with CCS or direct air capture and carbon storage.

For more information on new end-use technologies and trends, see: