Between 2005 and 2013, three refineries closed in central and Atlantic Canada: Imperial Oil Dartmouth (2013), Shell Montreal (2010), and Petro-Canada Oakville (2005). While the ageFootnote 1 and complexity of those refineries were factors, changing environmental regulations for gasoline, overall declining demand for RPPs, and higher crude oil costs for eastern refineries have led to a broader, long-term trend of smaller refineries closing and consolidating in favour of larger, more complex ones.

There had been no new refineries built in Canada in 30 years. However, in late 2017, the Sturgeon Refinery located northeast of Edmonton began operations.

Figure 6: Average Capacity per Refinery vs Number of Refineries 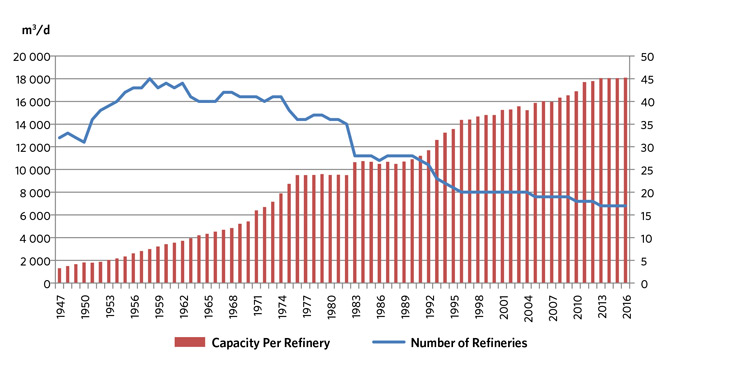 Sturgeon is estimated to process 13 103m3/d (79 Mb/d) of diluted bitumen into ultra-low sulphur diesel fuel and other high-value products, including diluent.

In its first phase of operation, the Alberta government will provide 75% of the diluted bitumen feedstock and Canadian Natural Resources will supply the remaining 25%.

The refinery produced its first diesel fuel in December 2017. It is still under construction and can currently only process synthetic crude oil and not bitumen.

Sturgeon is using advanced technologies to reduce environmental impacts, including a carbon capture and storage (CCS) system. The refinery will also tie into the Alberta Carbon Trunk Line that will transport CO2 to declining oil fields in central Alberta for the purpose of enhanced oil recovery.

The Dartmouth Refinery operated for 95 years, the Shell refinery for 76 years and the Oakville Refinery for 63 years.