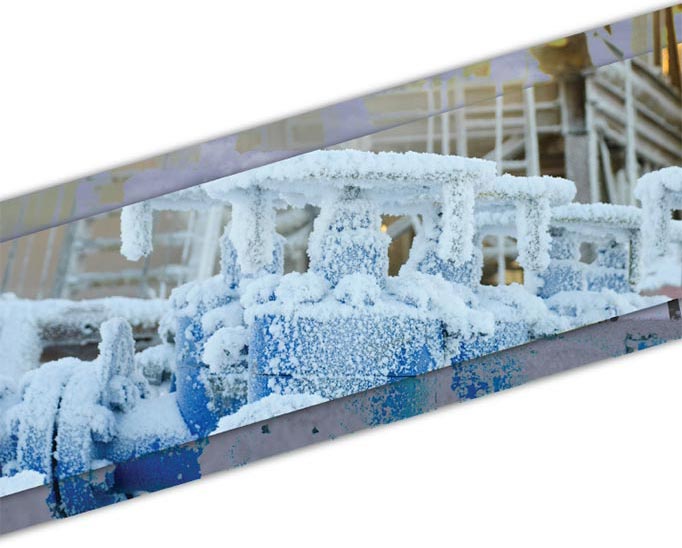 The National Energy Board is an independent federal regulator established to promote safety and security, environmental protection and economic interest within the mandate set by Parliament or the regulation of pipelines, energy development and trade. The Board's main responsibilities include regulating interprovincial and international oil and natural gas pipelines, international power lines, and designated interprovincial power lines through their lifecycle including the application, construction, operation and abandonment phases.

For oil and natural gas exports, the Board’s role is to evaluate whether the oil and natural gas proposed to be exported is surplus to reasonably foreseeable Canadian requirements, having regard to the trends in the discovery of oil or gas in Canada. If a party wishes to rely on material from this report in any regulatory proceeding before the Board, it may submit the material, just as it may submit any public document. Under these circumstances, the submitting party in effect adopts the material and could be required to answer questions pertaining to its content. This report does not provide an indication about whether any application will be approved or not. The Board will decide on specific applications based on the material in evidence before it at that time.

The amount of marketableFootnote 2 (i.e., recoverable) oil was not estimated because well-test results are not yet publicly available and there is still uncertainty about whether these shales are capable of production. However, if only one percent of the in-place resource could be recovered from the Canol Shale, it would represent a marketable resource of 1.45 billion barrels. Based on the limited geological data available, the analysis assumes that both shales are saturated with oil throughout the study area.

The NTGS requested the assessment to better understand the resource potential of the Mackenzie Plain.

Industry has recently been targeting the Canol Shale in the central Mackenzie Plain. Fourteen exploration licenses have been granted there since 2010-2011, for a total of $627.5 million in work-bid commitments. Seven new exploration wells have been drilled since 2012. In 2014, two horizontal wells were drilled, the results of which are not yet publicly available. Historical conventional production of 274 million barrels at Norman Wells came from the Devonian-aged Ramparts Limestone. With the recent decline in oil prices, most companies have put their exploration plans for the Northwest Territories (NWT) on hold.

The National Energy Board and the Northwest Territories Geological Survey jointly assessed the unconventional oil-in-place (OIP) resources for the Bluefish Shale and the Canol Shale. This is the first publicly released study of it.

The project area covers the whole Mackenzie Plain and has an areal extent of 18,277 km2. 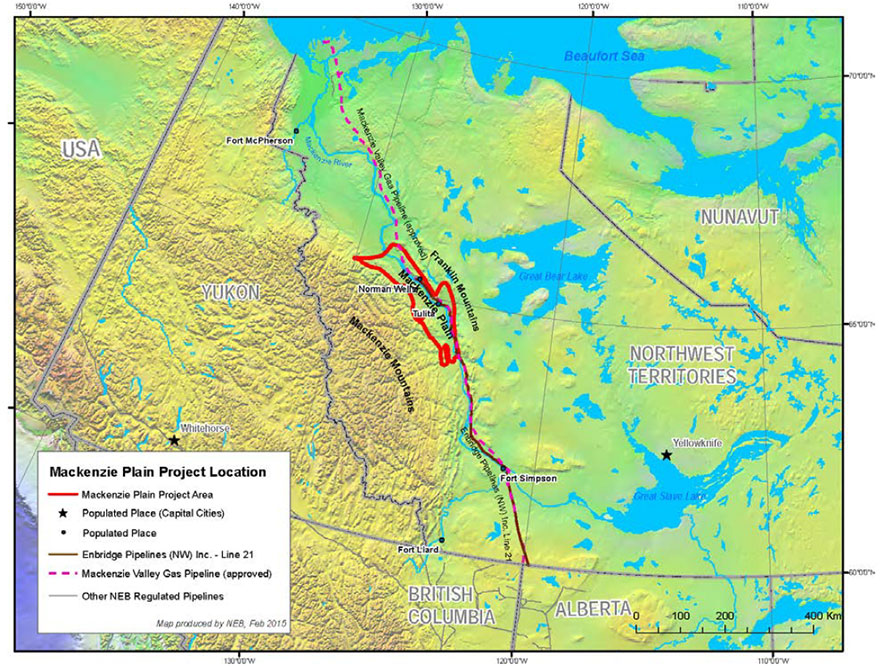 The Ramparts Limestone locally contains reefs of the Kee Scarp member at its top, which is the primary reservoir of the conventional oil field at Norman Wells. The Kee Scarp reefs have produced 274 million barrels of oil to date. The oil within the conventional reservoir at Norman Wells is thought to have been sourced from the organic-rich rocks of the Canol Shale, while the Bluefish Shale is not thought to have been a significant contributorFootnote 3. Both of these shales appear to be prospective for oil in the Mackenzie Plain according to limited geological data.

The Bluefish Shale ranges from 2 m to 62 m thick and thickens to the south within the Mackenzie Plain. The Bluefish is black to dark grey in color and contains only a few thin limestone beds. The shale is rich in silica and organic matter and contains small amounts of pyrite.

The Canol Shale extends from the Franklin Mountains east of Norman Wells to the Richardson Trough of the Yukon in the west. In the project area, its thickness varies from a few metres to greater than 100 m. The Canol consists largely of dark grey to black, silica-rich shale with some pyrite and interbeds of siltstone and mudstone.

The Horn River Group of the NWT is stratigraphically equivalent to the shale-gas prospects in the Horn River Basin and the Cordova Embayment of Northeast British Columbia. The Canol Shale is also stratigraphically equivalent to the Duvernay Shale of Alberta, which is prospective for both shale oil and shale gas (including significant amounts of gas condensate).

Both the Bluefish Shale and the Canol Shale have high total porosity (8% and higher) and low water contents, meaning they have good storage capacity for oil or gasFootnote 4. They both contain high amounts of organic carbon for a shale (6% and greater). Measurements of thermal maturity indicate that these shales were heated into the oil window making them prospective for oil. The Bluefish Shale and the Canol Shale also have low clay contents and high silica contents, which would make them brittle and prone to fracturing if hydraulic fracturing was applied. For more information on the geology of the Bluefish Shale and the Canol Shale, please see NWT Open File 2014-06Footnote 5. Because of a lack of publicly available production tests, there is still uncertainty about whether these shales are capable of production.

In-place volumes of oil were calculated using probabilistic methods recently developed to assess the unconventional oil resources in the Montney Formation of British Columbia and the Bakken Formation of Saskatchewan. These methods are based on volumetric equations and Monte Carlo simulations and were modified to reflect the local characteristics of the Bluefish and the Canol shale oil plays.

Statistical distributions were applied to some variables in the volumetric equations and then a Monte Carlo simulationFootnote 6 was used to estimate low, expected, and high values. In-place petroleum resources were determined for oil only. The amounts of marketable resources were not estimated because a lack of production data makes it uncertain whether these shales are capable of production.

More details on the methods are available in Appendix A.

The analysis does not estimate the amount of marketable (i.e., recoverable) oil because well-test results are not yet publicly available and there is still uncertainty about whether these shales are capable of production. However, even if only one percent of the Canol’s in-place resource could be recovered, it would represent a marketable resource of 1.45 billion barrels.

Recovery factors being achieved from the Eagle Ford Shale of Texas and the Niobrara Shale of Colorado would not be applicable to the Canol Shale, as these are condensate-rich shale-gas plays that behave differently than shale-oil plays. Recovery factors from the Bakken Formation of North Dakota would also not be applicable to the Canol Shale, as the Bakken is a siltstone, with production characteristics that are considerably different from a shale. The closest analog might be the Permian Basin of Texas, where operators report expected recovery factors of about three per cent. However, a key difference is that large areas of the Canol Shale are located at significantly shallower depths than these other shale-oil prospects and the lower pressures may make the recovery of oil more difficult. If a three per cent recovery factor was applied to the in-place value for the Canol Shale, the recoverable resource would become 4.35 billion barrels.

This analysis also does not provide an estimate of the amount of solution gas present in the oil because of a lack of information. Based on the geological data available, the analysis assumes that both shales are saturated with oil throughout the study area. If future exploration discovers natural gas in these shales, the amount of OIP would need to be reduced to accommodate the volume of natural gas.

Uncertainty in the estimates is reflected by the spread between estimated low and high values in Table 1Footnote 7. Much of the assessed area has seen very little exploration. As new exploration occurs, the level of uncertainty in these areas is likely to decrease and the range would become smaller.

The analysis of the Bluefish Shale and the Canol Shale unconventional oil-in-place resources is largely based on methods developed to assess the unconventional oil resources in the Montney Formation of British ColumbiaFootnote 8 and the Bakken Formation of SaskatchewanFootnote 9, although it incorporates some new approaches to reflect geological differences in the reservoirs.

1) The analysis does not provide an estimate of the amount of solution gas present in the oil because of a lack of information. Based on the geological data available, the analysis assumes that both Bluefish and the Canol shales are saturated with oil throughout the project area.

2) The marketable (i.e., recoverable) unconventional resource was not assessed because there are few publicly available production tests.

The entire project area was assessed for oil-in-place resources in the Bluefish Shale and the Canol Shale.

The data was aggregated on an NTS (National Topographic System) block basis. The equations to determine petroleum volumes were applied to each NTS block.

Like the Horn River Basin, Montney, and Bakken assessments, this assessment was done on a map-grid basis where, at each grid point, Monte Carlo simulations were run on a mathematical equation to determine volumes, and the results summed to determine the total.

Further, the assessment was integrated at two levels: i) a tract-by-tract scale; and ii) a basin scale (Figure A.1) in order to try to incorporate local changes with uncertainties inherent at the basin level. Please see the “Resource Modeling” section of the 2011 Horn River Basin assessment for more details on this “distribution of distributions” methodFootnote 10.

Net thickness maps for the Bluefish Shale and the Canol Shale were provided by the NTGS. Table A.1 contains variables used in the assessment (both mapped and unmapped) and shows which variables had distributions applied to them for the Monte Carlo simulation. Because of large uncertainties in reservoir characteristics in the subsurface due to the limited set of geological data, representative distributions for effective porosity and water saturation were applied over the entire project area. No distribution was applied to the formation volume factor.

A confidence factor was applied on each block based on the number of wells present to reduce potential skewing of distributions modeled on mapped data. Essentially, a percentage of a block was deemed to be discovered by the number of grid-spacing units penetrated by a well. Then the spread of the distribution’s low and high values away from the “most likely” value were accordingly reduced. In other words, “soft”, rather than “hard”, maximums or minimums were used for distribution curves, as long as the “soft” values did not exceed or fall below impossible values (such as creating negative numbers). Further, when applying the basin-scale distribution to the tract-scale distribution, variables that could have zero as a minimum (such as porosity or water saturation) always had their minimums tied to zero. As a result, not only did the maximums and most likely values vary for those distributions at the tract level, but the shape of the curve could also change.

The Bluefish Shale and the Canol Shale were assumed to contain free oil only. Therefore, a volumetric equation was used to determine oil-in-place content:

“In place” refers to the total amount of petroleum located in the reservoir. Only a small fraction of this might be able to be produced.

“Marketable resources” indicates the volume of in-place petroleum that is recoverable under foreseeable technological conditions and in a condition ready to be used by the market.

A Monte Carlo simulation is a computerized process where random numbers (as determined from a statistical distribution) are picked hundreds to thousands of times to help determine a range of possibilities and uncertainty in an estimate.

BC OGC, AER, BC MNGD, NEB. The Ultimate Potential for Unconventional Petroleum from the Montney Formation of British Columbia and Alberta (2013).

Sask. Ministry of the Economy, NEB. The Ultimate Potential for Unconventional Petroleum from the Bakken Formation of Saskatchewan (2015).