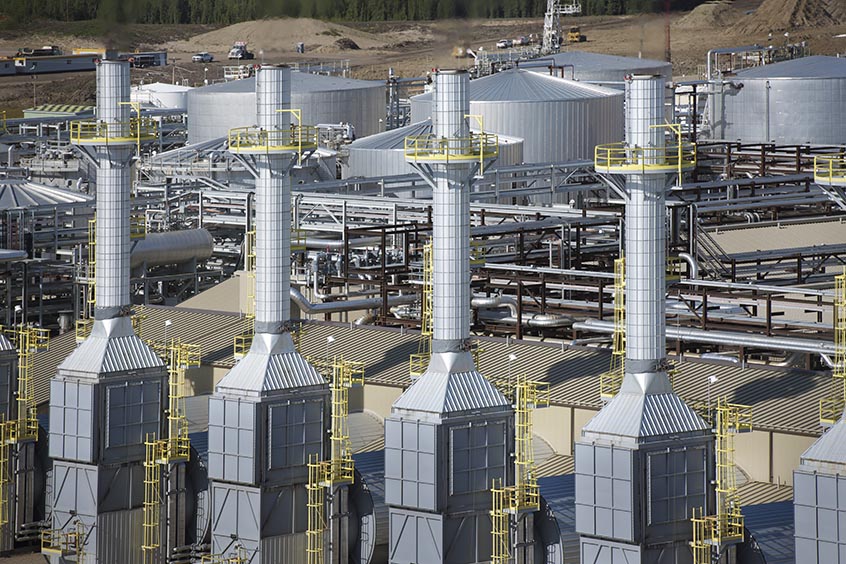 The National Energy Board’s (NEB) Energy Futures (EF) series explores how possible energy futures might unfold for Canadians over the long term. EF analyses consider a range of impacts across the entire Canadian energy system. In order to cover all aspects of Canadian energy in one supply and demand outlook, the extensive crude oil, natural gas, and natural gas liquids (NGL) production analyses are described at a relatively high level. A series of supplemental reports is able to address impacts specific to the supply sector, creating an opportunity to provide additional detail.

Future oil prices are a key driver of future oil production and a key uncertainty to the projections in the Canada’s Energy Future 2018: Energy Supply and Demand Projections to 2040 (EF2018). Crude oil prices could be higher or lower depending on demand, technology, geopolitical events, and the pace at which nations enact policies to reduce GHG emissions.

EF analysis assumes that, over the long term, all energy produced will find markets. In the near-term, a lack of available pipeline export capacity was accounted for in the price assumptions for western Canadian crudes. The timing and extent to which particular markets emerge, whether demand growth over/undershoots local production, whether export/import opportunities arise, and whether new transportation infrastructure is built, are difficult to predict. This is why simplifying assumptions are made. The analysis in this supplemental report continues the EF tradition of assuming these short-term disconnects are resolved over the longer term.

Alberta’s oil sands will be responsible for the majority of crude oil production in Canada through 2040 in all four cases, mainly because of growing in situ production. This supplemental report provides additional analysis and results of EF2018’s four cases. Differences in production forecasts between the cases are because of different oil price assumptions and new technologies used for in situ development in the Technology Case.

The Appendix describes methods and assumptions used to project production, and provides detailed data sets for all cases. These include monthly production by oil sands region, monthly production by method of extraction, and whether the production is from existing, expanded, or new projects. The data used in this supplemental report as well as from the appendices are available here [EXCEL 709 KB]. 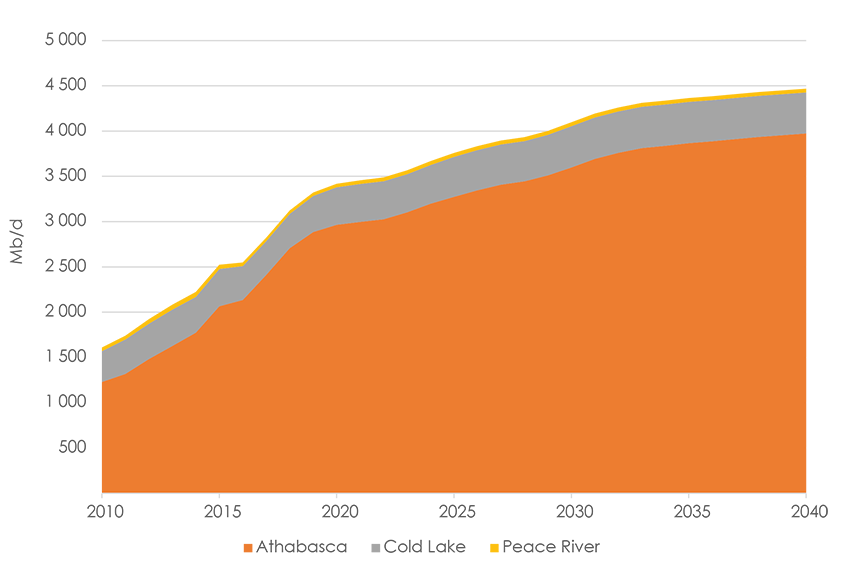 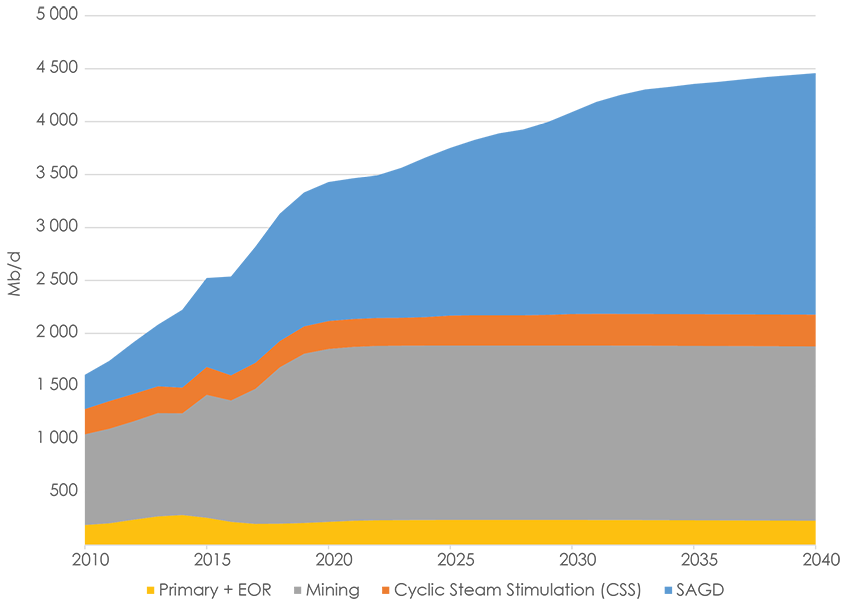 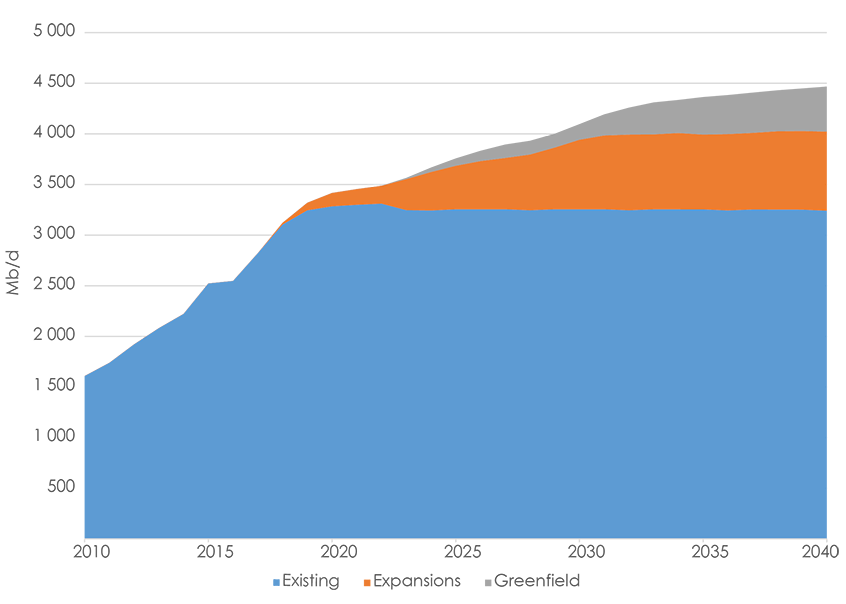 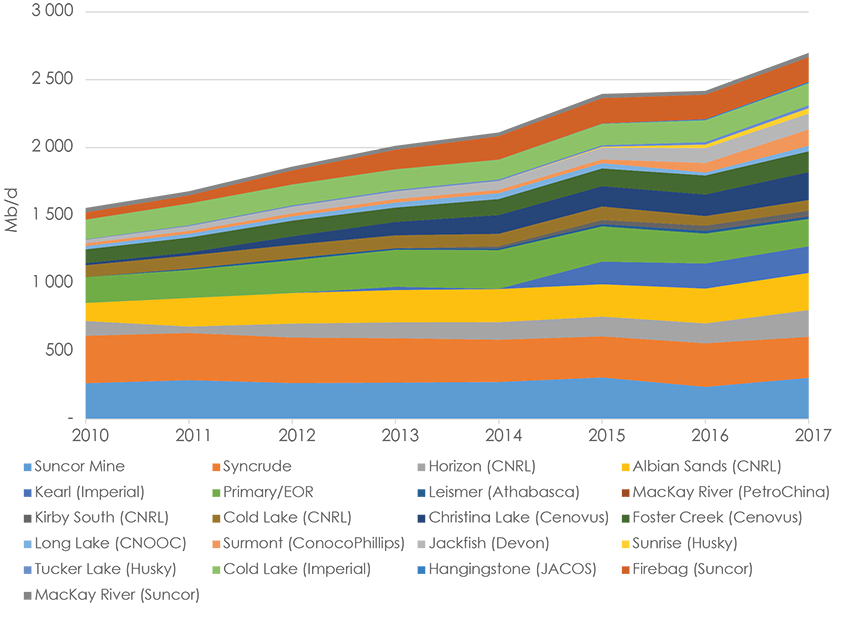 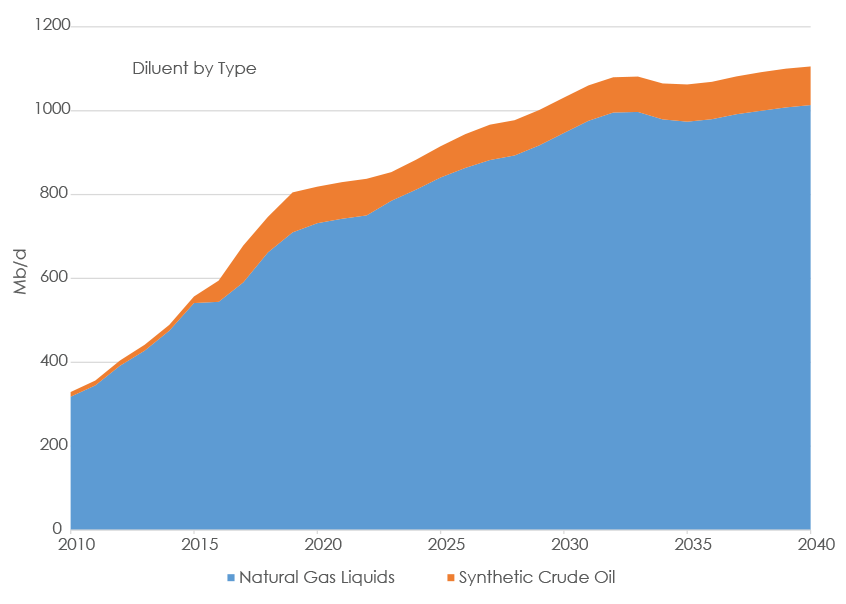 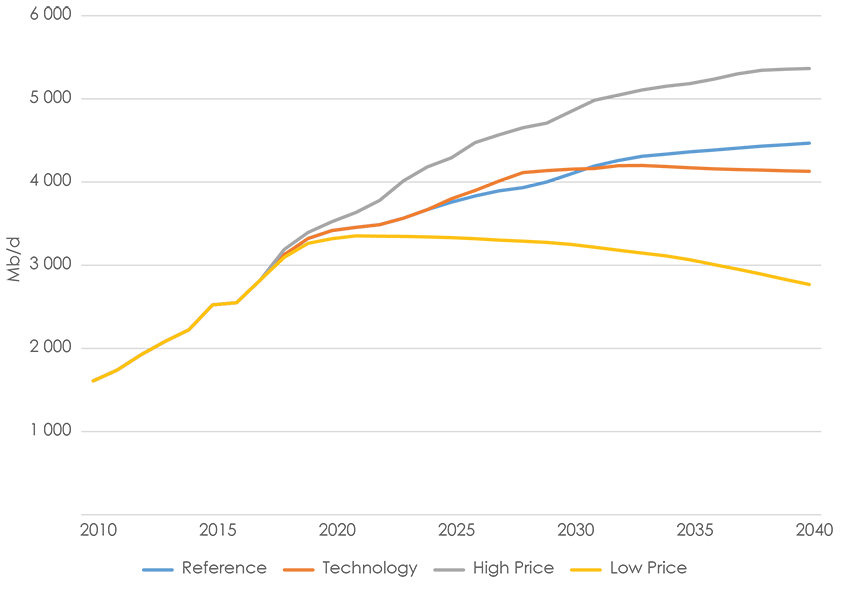 Oil sands production is projected by applying utilization rates to the capacities of existing oil sands projects and the timelines of new projects and expansion phases expected to be built in the future. Projections do not consider changes to production as a result of weather, equipment failure, or other potential interruptions. Raw bitumen production and synthetic crude oil production are projected for each case.

The main differences between the cases are oil prices, carbon taxes, and technology assumptions. Varying oil prices affect industry revenues, and the reinvestment of a portion of the revenue as capital expenditures. Varying carbon taxes affect the net revenue available. The higher the carbon taxes, the higher the cost of production and the lower the net revenue. Technological advancements affect both bitumen production, as well as the steam to oil ratio (SOR). These variations do not affect all oil sands projects uniformly. For instance, the better a project’s SOR, the less impact rising carbon taxes have. This results in an emissions credit for some projects in some years. More details about how emissions are calculated are provided in Section A4.4.

Mining and in situ production are estimated using the same method. Projects are assessed based on their announced capacities and start dates and then risked in terms of start time. Production from all projects of each type (i.e. mining, in situ) is then aggregated. Production from projects that are currently operating is held relatively constant for the majority of the projection. In some cases, depending on the age of the facility, production is decreased towards the end of the projection period. Increases in production for any given project are largely the result of new phases coming online and, to a lesser extent, process improvements in the early years of that project or phase. These methods significantly differ from conventional oil projections, which are well-based and use decline-curve analysis.

For this analysis, oil sands production is categorized by type of production, type of recovery, geography, and recovery method. Figure A.1 shows the breakdown. 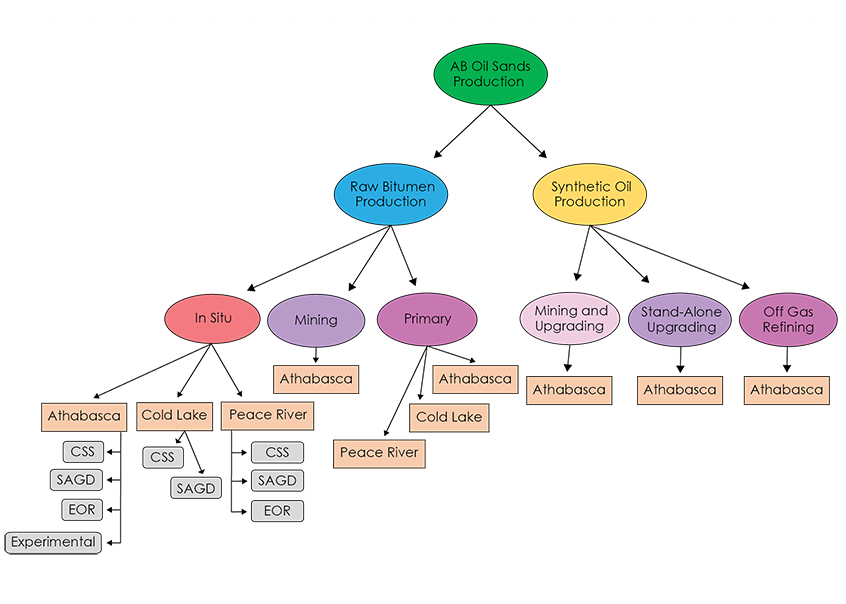 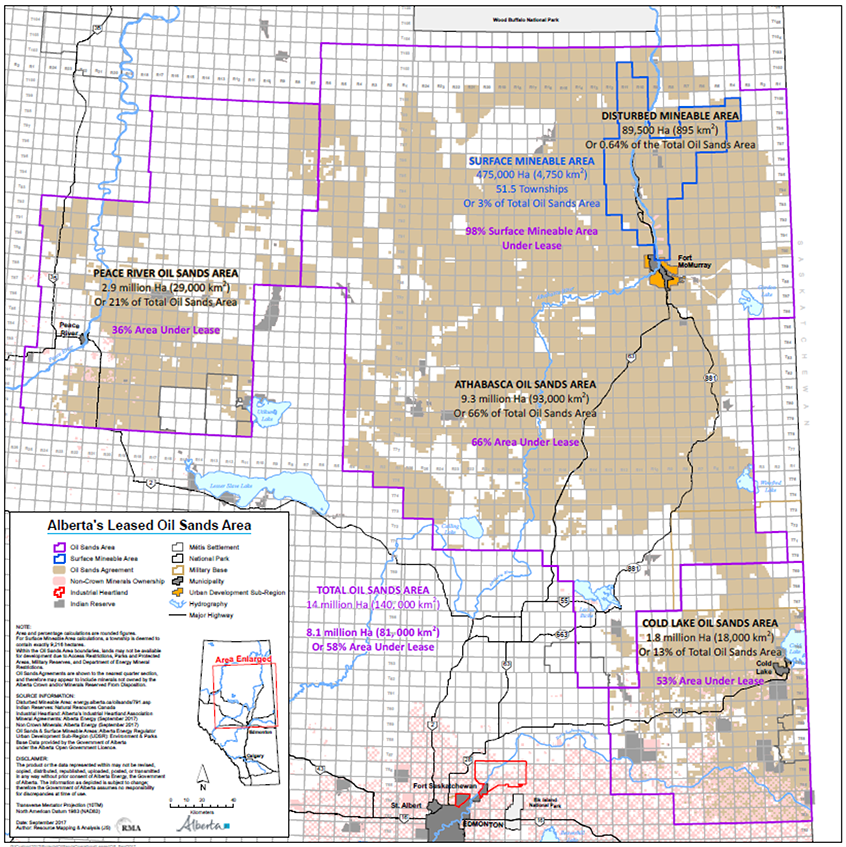 A.1.2 Type of Production – Raw Bitumen and Synthetic Crude Oil

Bitumen is produced in one of four ways. Roughly 90% is either mined or extracted using in situ methods. Remaining production comes from Primary and Enhanced Oil Recovery (EOR). Primary bitumen production is slightly less viscous than in situ bitumen and can flow to the surface without applying heat or solvents. However, these projects are of a smaller scale than in situ developments. EOR uses reservoir flooding similar to the technology used for conventional oil. These too are smaller scale than either mining or in situ projects. Combined, there were over 150 Primary and EOR projects operating within Alberta in 2017.

There are three types of in situ recovery technologies included in this report: SAGD, CSS, and EOR.

SAGD typically uses pairs of horizontal wells to produce bitumen. Steam is injected into an upper well to heat the bitumen, which then drains by gravity into a lower well and is pumped to the surface.

CSS also uses steam to produce bitumen. The steam is injected into a reservoir through a well over a period of several months, heating and decreasing the bitumen’s viscosity. Later, the steam is turned off and the emulsion of water and bitumen flows back into the well over a period of several months. The process is repeated for the economic life of the well.

EOR extracts oil from reservoirs once pressures have fallen to a point where natural production is no longer economically viable, even with artificial lifts like pump jacks. This includes pressure maintenance, cycling, water flooding, thermal methods, chemical flooding, and the use of miscible and immiscible displacement fluids.

A.2 Methods to Project Bitumen Production

For this report, historical production data, plans announced by producers, and industry and government consultations were used to derive projections. Monthly projections out to the end of 2040 are made for existing projects, for future (new) projects, and for expansions of both existing and new projects.

A.2.1 Method for Existing Projects

A.2.2 Method for Expansions

A.2.3 Method for Future Projects

Given a projected oil price and other assumptions, it may be warranted to include one or more new projects in the projection. New in situ projects are expected to be built as well though the timing, size and number of projects differs between the cases.

Synthetic crude oil is raw bitumen that is processed into a lighter crude oil. Most mined bitumen is currently upgraded and it is assumed this trend will continue throughout the projection period. In addition to mining, some in situ and heavy oil production is upgraded.

Diluent requirements are estimated by taking into account the annual average blending ratios for each individual oil sands project. This ratio varies by type of heavy crude oil being blended and the type of diluent being used. The volume of diluent required to blend conventional heavy oil (i.e. all heavy oil not produced by the oil sands) is also included in this analysis.

A.5 Other Assumptions and Analysis

The cost of carbon dioxide emissions are included in the analysis. The cost of emissions decreases industry revenue and cash flow available for future capital expenditures. However, on a project by project basis, the cost of carbon may or may not affect the production projection. More efficient projects with lower SORs won’t have their economics affected as much as less efficient projects. Thus, for most projects, given current and projected SORs, the production projection is the same Note de bas de page 3 for varying carbon prices. Less efficient, usually smaller, projects are assumed to be affected with some production taken out of the projection given the carbon and oil price assumptions.

The amount of gas consumed, and CO2 emitted, can be calculated using the gas use per barrel of bitumen or synthetic oil discussed in section A.4.2. The assumed ratio is:

An output-based adjustment, as based on Alberta’s climate plan, was then applied to the actual cost of CO2, for each project by year. For a given year, the projects are ranked from lowest SOR to highest SOR. The 25th percentile lowest SOR is a threshold level. The carbon cost associated with that SOR is the output-based adjustment and all projects’ carbon costs are adjusted by that amount. Thus, the projects with lower SORs than the threshold end up with a carbon cost less than zero (revenue is adjusted up) and the rest of the projects have lower, but still positive carbon costs (revenue is adjusted lower). More information on carbon calculations and provincial policies can be found in the Energy Future 2018 report.

Data for the figures in Appendices A and B are available in a Microsoft Excel file [EXCEL 709 KB].

Wedge wells or infill wells refers to a well drilled between two horizontal SAGD well pairs. This is done to collect bitumen that has been heated within the reservoir but that may be located too far from already existing wells to be produced.

Nameplate production capacity of a project does not change with changing carbon prices.