2009 Reference Case Scenario: Canadian Energy Demand and Supply to 2020 - An Energy Market Assessment [ZIP 3208 KB]
(Maintains links between report charts and their associated data, and between appendices and data files.)

The National Energy Board (the NEB or the Board) is an independent federal agency whose purpose is to promote safety and security, environmental protection, and efficient energy infrastructure and markets in the Canadian public interest[*] within the mandate set by Parliament in the regulation of pipelines, energy development and trade.

In an advisory function, the Board also keeps under review and analyzes matters related to its jurisdiction and provides information and advice on aspects of energy supply, transmission and disposition in and outside Canada. In this role, the NEB publishes periodic assessments to inform Canadians on trends, events and issues which may affect Canadian energy markets.

The NEB has a long history of providing energy supply and demand projections to Canadians. The first long-term energy supply and demand report was published in 1967. The most recent report entitled Canada's Energy Future: Reference Case and Scenarios to 2030 was released in November 2007. As the title suggests, the report examined possible energy futures that might unfold for Canadians up to the year 2030 and provided a Reference Case which extended to 2015. In this report, the NEB is updating and extending the Reference Case Scenario analysis contained in the 2007 report.

As with the 2007 report, the NEB sought the views of Canadian energy experts and interested stakeholders through consultation sessions held in the spring of 2009. The NEB would like to take this opportunity to thank the participants in the consultation process. The views collected helped shape the report assumptions and analysis.

Comments or questions on this report can be directed to:

If a party wishes to rely on material from this report in any regulatory proceeding, it can submit the material as can be done with any public document. In such a case, the material is in effect adopted by the party submitting it and that party could be required to answer questions on it.

Information about the NEB, including its publications, can be found by accessing the Board's website at www.neb-one.gc.ca.

This report is an update and extension of the Reference Case contained in the NEB's 2007 report entitled Canada's Energy Future: Reference Case and Scenarios to 2030. The 2009 Reference Case Scenario is based on current best estimates of energy price projections, an economic outlook and government programs existing at this time. Energy demand and supply projections are provided to the year 2020. In view of the current uncertainty of oil and gas prices, High and Low Price Cases are also presented.

As in its previous assessments of long term energy supply and demand, this report allows the Board to communicate with Canadians on emerging energy trends and implications for Canada's energy markets and infrastructure. In developing this outlook, the NEB met with energy experts and interested stakeholders, including representatives from industry, government, environmental non-government organizations, and academia, in early 2009 to help shape key assumptions and obtain feedback on projected outcomes.

The key findings of 2009 Reference Case Scenario are:

Notwithstanding the factors mentioned above, the overarching conclusions from the 2007 Reference Case remain intact. Canadians can expect the energy markets to function well with energy prices balancing demand and supply. Energy from conventional fossil fuels is expected to be the dominant source of supply, although non-conventional sources will continue to gain share. The integration of energy, environment and economy will continue to grow and Canadians will increasingly include environmental considerations in their decision making.

[12] Note that the 2009 outlook for energy demand growth by sectors is not directly comparable to the 2007 Energy Future's Reference Case outlook due to changes in sector definitions. These changes were motivated by a desire to align various energy demand data sets in Canada. The difference in total historic end-use demand is less than one per cent in any given year but sectoral differences are larger.

Demand includes petrochemical facilities use as well as solvent flooding. 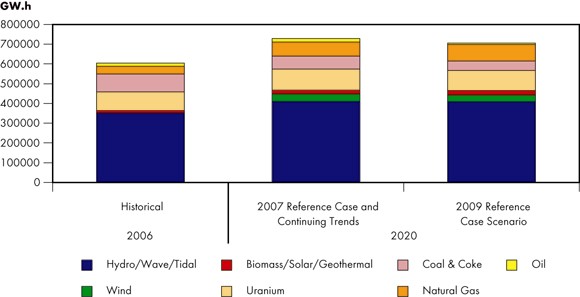 The sum of Canadian thermal, metallurgical, and end-use coal demand as well as exports is equal to Canadian production.

Appendices are available on the Boards' Website at www.neb-one.gc.ca, and include the following detailed data.