The Montreal Pipe Line is the Canadian portion of the Portland Montreal Pipe Line (PMPL). PMPL is a 380 km pipeline system that transports eastern Canadian and international crude oil from Portland, ME to Suncor’s refinery and Enbridge’s terminal in Montreal, QC. The PMPL system is comprised of three pipelines along the same right-of-way. The largest pipeline (24-inch) is the only line in operation. The other two pipelines (12-inch and 18-inch) were deactivated in 1982 and 2011, respectively. 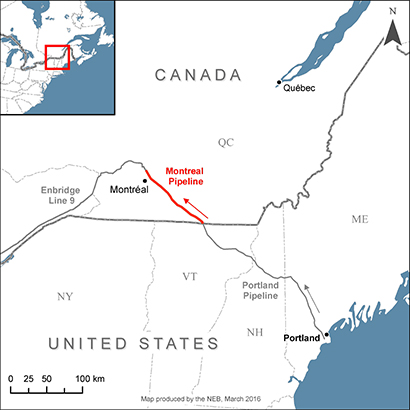 The Montreal Pipe Line reported no throughputs from January to March 2016. In December 2015, the Enbridge Line 9 Expansion and Line 9B Reversal Project came into service, enabling Quebec refiners to access western Canadian and U.S. crude oil supply by that pipeline.

Due to the implementation of the Financial Resource Requirements of the Pipeline Safety Act Regulations, Montreal Pipe Line Limited (MPL) indicated its intention in May 2016 to reduce the capacity of its system to less than 39 700 m³/d (250 Mb/d).

MPL submitted an application to the Board in April 2014 to deactivate its St.-Césaire Pump Station and related facilities. The NEB approved the application in May 2014 and deactivation was completed in December 2014.

MPL received regulatory approval on April 2011 to deactivate its 18-inch pipeline between Highwater and Montreal East, QC and deactivation was completed in December 2011. 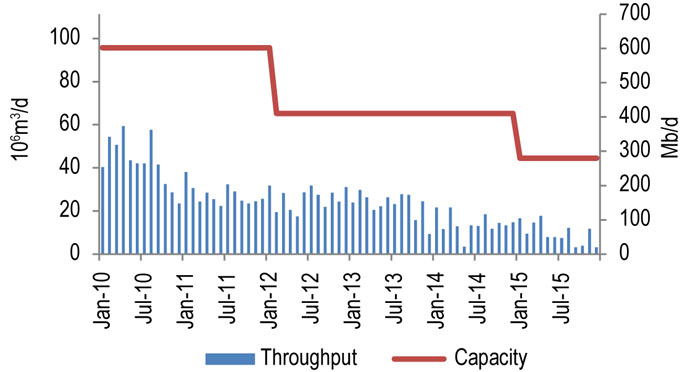 Figure 9.5.2 shows the Montreal Pipeline benchmark toll (transportation from the U.S. border to Montreal East) and the GDP deflator (normalized) for 2010-2015. The sharp increase in tolls between 2013 and 2014 was a result of decreased throughput. Tolls are regulated on a complaint basis.

Revenue and net income have decreased due to reduced throughput.