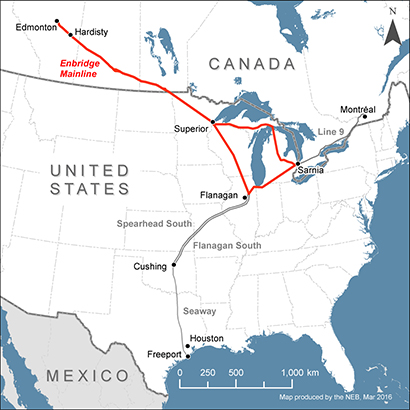 The Enbridge Mainline system is Canada’s largest transporter of crude oil. It originates in Edmonton, AB and extends east across the Prairies to the Canada-U.S. border near Gretna, MB where it joins with the Enbridge Lakehead System. It re-enters Canada at Sarnia, ON and connects with Line 7, and Line 9 which delivers to Montreal, QC. Figure 8.1.1 depicts the system’s configuration. The Lakehead system also connects with pipelines that deliver crude oil to Cushing, OK and the U.S. Gulf Coast.

In 2014 and 2015, Enbridge completed the Canadian portions of the Alberta Clipper (Line 67) Expansion Project, increasing capacity by a total of 55 600 m³/d (350 Mb/d) to the full design capacity of 127 100 m³/d (800 Mb/d). This, together with flexibility enhancements, has resulted in higher throughputs on the Enbridge Mainline.

In November 2014, an application for the Line 3 Replacement Program was filed with the Board. It sought to restore the capacity of the pipeline to 127 200 m³/d (760 Mb/d) by 2019. On 25 April 2016, the Board concluded that the Enbridge Line 3 Replacement Program would be in the Canadian public interest and issued its recommendation for project approval to the federal Governor in Council.

Enbridge expects to add 63 600 m³/d (400 Mb/d) of capacity to Line 61 between Superior and Flanagan, IL by 2017, which would increase effective export capacity from Canada. 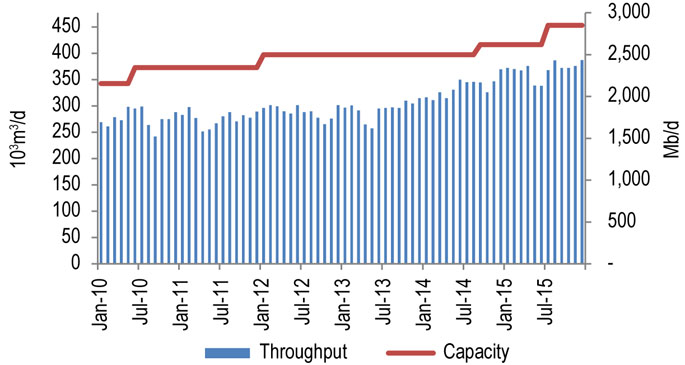 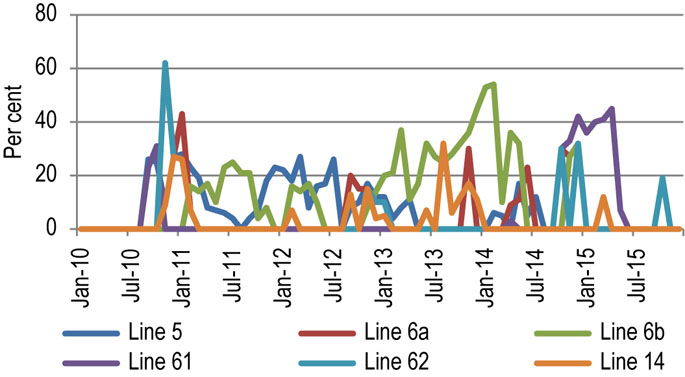 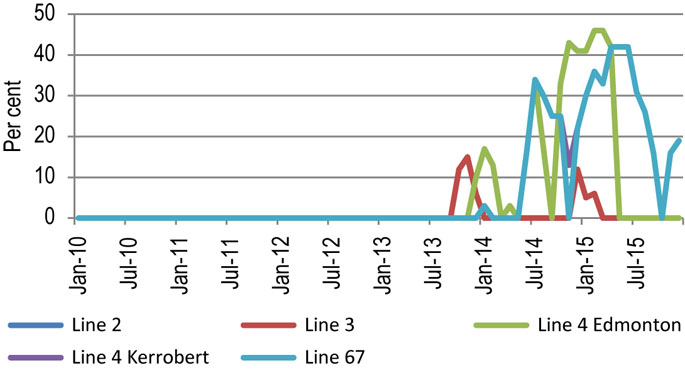 Enbridge operates under the 2011 Competitive Tolls Settlement (CTS). The CTS came into effect on 1 July 2011 and expires on 30 June 2021. Tolls for Line 9 are not included in the CTS.

Figure 8.1.5 shows the Enbridge benchmark toll (light petroleum transportation from the Edmonton Terminal to the international border near Gretna, MB) and the GDP deflator (normalized) for 2010-2015. The benchmark toll increased by approximately 20% in 2011, mainly as a result of Enbridge Alberta Clipper pipeline costs. It increased by 23% in 2015 with the addition of the Edmonton Transportation Surcharge related to the Edmonton-to-Hardisty Pipeline Project.

In 2015, Enbridge Inc. completed multiple financial restructuring processes affecting Enbridge Pipelines Inc. Enbridge Pipelines Inc.’s financial ratios have weakened in recent years due to increased debt in its capital structure. Its credit rating was downgraded in 2015 by both Standard and Poor’s (S&P) and Moody’s, but remains investment grade. Each viewed Enbridge Pipeline’s parent company, Enbridge Inc., as having weakened financial metrics, increased structural subordination, and a financial policy that shifted in favour of shareholders. Dominion Bond Rating Service (DBRS) downgraded Enbridge from “A (high)” to “A” in 2011 after Enbridge implemented the CTS which introduced volume and operational risks to the Enbridge Mainline through a fixed-toll methodology as opposed to the previous cost of service method.