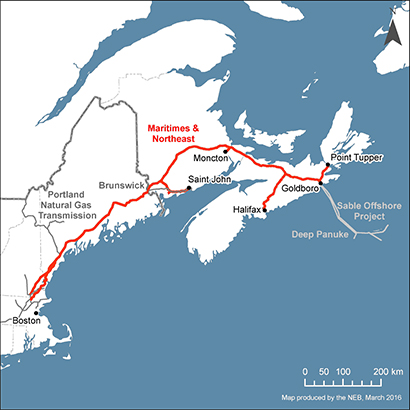 Application for Approval of 2014-2016 Tolls Settlement

The Maritimes & Northeast Pipeline (M&NP) in Canada extends from Goldboro, NS through New Brunswick to a point on the Canada-U.S. border near St. Stephen, NB. In the U.S., M&NP continues through Maine and New Hampshire into Massachusetts. It interconnects with the Emera Brunswick Pipeline, Portland Natural Gas Transmission System, Tennessee Gas Transmission, and Algonquin Gas Transmission.

M&NP was commissioned in December 1999 to transport natural gas produced from the Sable Offshore Energy Project (Sable) to markets in the U.S. Northeast. It currently also transports offshore natural gas from the Deep Panuke project, and supply from the McCully gas field in New Brunswick. M&NP can flow bi-directionally and natural gas will flow from the U.S. into Canada when offshore production is insufficient to meet domestic demand. Incremental supply comes from the Canaport LNG import terminal via the Brunswick Pipeline or from the Portland Natural Gas Transmission System.

Natural gas supply from offshore Nova Scotia declined in 2015. In mid-May, production at Deep Panuke was shut-in and Encana (the operator) announced that the project would produce only during the winter months when demand and gas prices are highest. In addition, Deep Panuke’s reserve estimate was cut by half due to higher than expected water incursion into the reservoir. Production at Sable in 2015 remained steady averaging 4 106m³/d (0.14 Bcf/d); however, the project is in long-term decline. 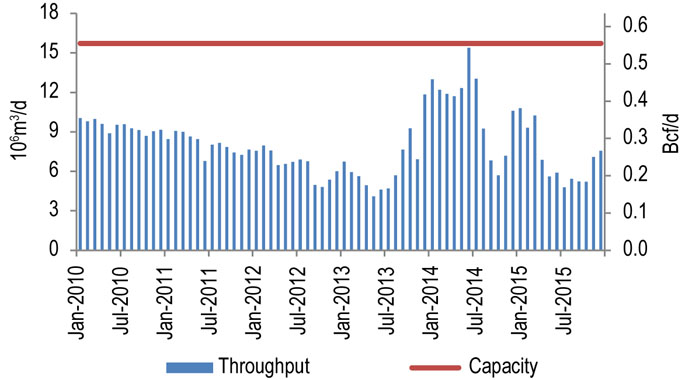 M&NP uses a ‘postage stamp’ tolling model in which the toll is the same for all paths on the system regardless of the distance travelled.  M&NP has been operating under a toll settlement for 2014-2016. Figure 10.7.3 shows M&NP’s benchmark toll (MN365 Toll) and the GDP deflator (normalized) for 2010-2015. The benchmark toll declined slightly in 2012 and 2013 due to lower revenue requirements, and in 2014 as the rate base decreased with depreciation. 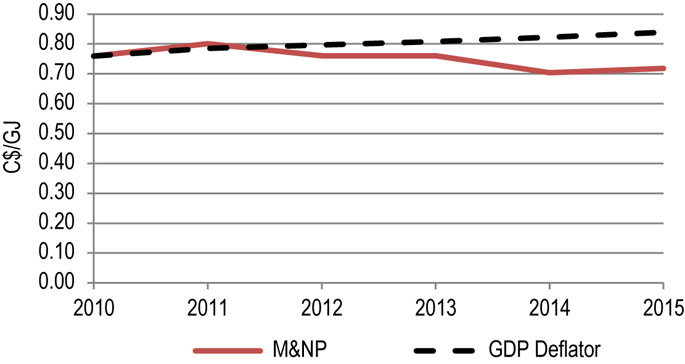 Maritimes & Northeast Pipeline L.P.’s financial ratios have improved due to the reduction of debt over time. DBRS has maintained its credit rating at “A” due to its predictable cash flows which are a result of firm transportation contracts with investment grade shippers, a backstop provided by ExxonMobil Canada, and a tolling methodology that is regulated on a cost of service basis.