Energy is closely tied to our quality of life as Canadians. Energy keeps us warm in the winter, cool in the summer, and provides us with light 24 hours a day. Energy enables the movement of people, goods, and services across the country and around the globe. It enables nearly all aspects of modern life from refrigerating foods and cooking meals to keeping us alive in extreme environments.

Energy also contributes to our national standard of living; accounting for 10% of our gross domestic product (GDP) and directly employing over 276 000 Canadians.Footnote 5 The other 90% of Canada’s GDP is highly reliant on energy for the provision of goods and services.Footnote 6

The interaction of the production, conversion, storage, distribution, and end-use of energy is what’s called an energy system. Table 1 illustrates the energy systems in Canada – from primary energy sources to the end-use where energy is converted to heat, work, or materials. In this sense, energy is a derived demand. That is, demand for energy comes entirely from our demand for the necessities for life.

When energy is used for heat or put to work (gasoline to power a car forward, for example), it is said to be useful. However, as energy is transformed from its primary energy source, transported to the end-user, or consumed by the end-user, losses and inefficiencies occur.

Figure 1 illustrates that the vast majority of energy consumed in Canada is ultimately lost. Energy losses can occur at all points in an energy system; that is, within the processes of production, conversion, and distribution of energy, or with the end-user. 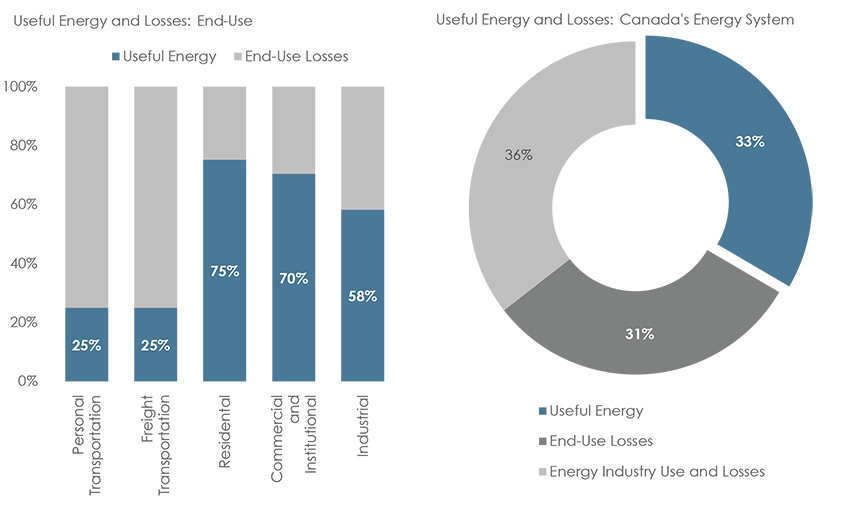 End-use losses are the differences between the fuel and electricity consumed by the end user and an estimate of the ultimate useful energy that is delivered. For personal and freight transportation, only 25% (on average) of the fuel consumed by vehicles and vessels is ultimately used for movement. The remaining 75% is lost from friction, combustion, exhaust heat, and idling.

Networks of roads, railways, pipelines, and electricity transmission lines across Canada distribute energy from producing regions to demand centres. There are significant regional differences in Canada with respect to where and what type of energy is produced, and where energy is consumed. The NEB’s Provincial and Territorial Energy Profiles illustrate the regional differences in Canada’s energy systems.

Thermal power plants have varying efficiencies, depending on technology. Canadian Energy Systems Analysis Research (CESAR) estimates that 29% of nuclear fuel is converted to electricity, while 26% to 36% of coal and 40% to 60% of natural gas is converted to electricity. CESAR also estimates that transmission and distribution losses on Canadian power grids are less than 10%.