The National Energy Board has as part of its mandate, the responsibility to monitor energy markets. Under this mandate, the Board issues reports on energy matters to inform Canadians.

Canadian end-use energy prices have generally risen over the last decade and become more volatile. This Energy Fact will explore pricing trends over the past decade for crude oil, gasoline, furnace oil, natural gas, and electricity.

Canada is a participant in the global oil market in which buyers and sellers trade volumes, mostly based on short-term contracts. This interaction sets the world price of oil. Although Canada is the sixth largest producer in the world, it produces only about four per cent of total daily production, so it has little influence on the world price of oil. As a result, Canada is a price taker, rather than a price setter. The price of crude oil is most commonly quoted in $US per barrel.

Figure 1 shows crude oil prices over the 2000 to 2010 period for the West Texas Intermediate (WTI) benchmark. 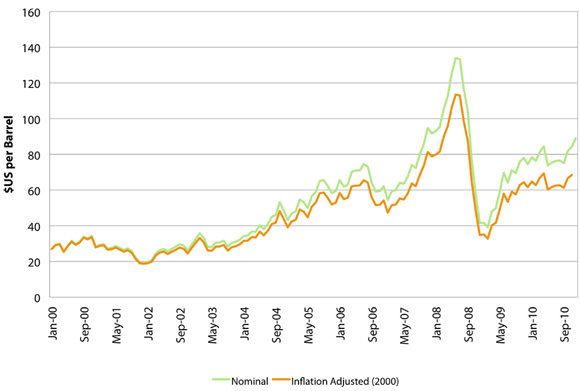 A brief overview of price developments over the 2000-2010 timeframe follows:

Petroleum Products Petroleum product pricing is primarily determined by crude oil pricing. The downstream petroleum sector is complex and highly competitive. Each petroleum product in each regional market reacts to a different set of supply/demand and transportation pressures and prices are set by both international and local market factors. As the physical distance from refinery to consumer point-of-sale increases, prices can be expected to be higher because of transportation costs. In addition, in rural areas where fewer retailers exist and competition is somewhat less intensive, prices would also tend to be higher than in larger centres. Differences in taxation are also a factor in regional price differences.

Figure 2 shows the average Canadian price of regular unleaded gasoline in Canada over the 2000 to 2010 period. Gasoline prices have closely tracked crude oil prices and were higher and more volatile in the second half of the decade (Figure 1) 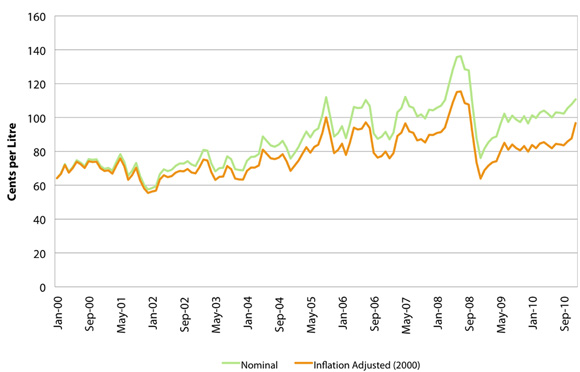 Five provinces, Newfoundland and Labrador, Prince Edward Island, Nova Scotia, New Brunswick and Quebec, currently regulate gasoline prices. Consumers in those provinces see fewer changes in prices but they are not paying less for gasoline on average than other Canadians.

Figure 3 shows retail prices for regular unleaded gasoline for selected major Canadian cities. Of these cities, prices were on average highest in Halifax, and lowest in Calgary. 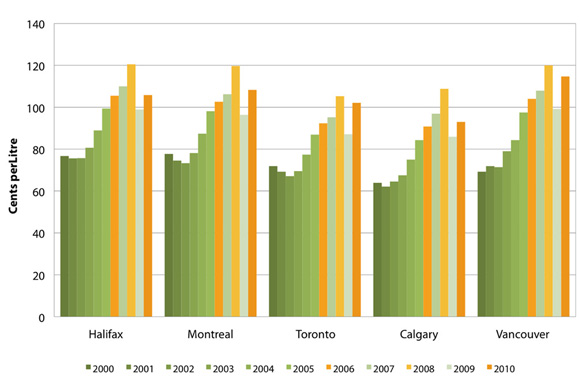 Furnace oil, also known as heating oil, is used in about 10 per cent of homes in Canada. Sales of furnace oil are concentrated in eastern Canada with Ontario, Quebec and Atlantic Canada accounting for about 95 per cent of total sales. Although Ontario and Quebec account for about two-thirds of Canadian demand, the Atlantic region is the most reliant on furnace oil for space heating. 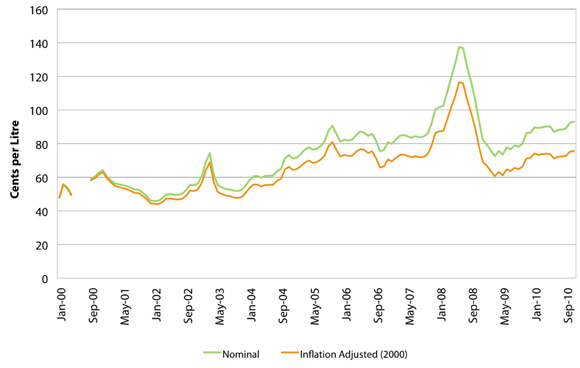 Figure 5 shows prices for furnace oil at retail for select major Canadian consuming cities. Of these cities, prices were on average highest in Saint John, and lowest in Montreal. 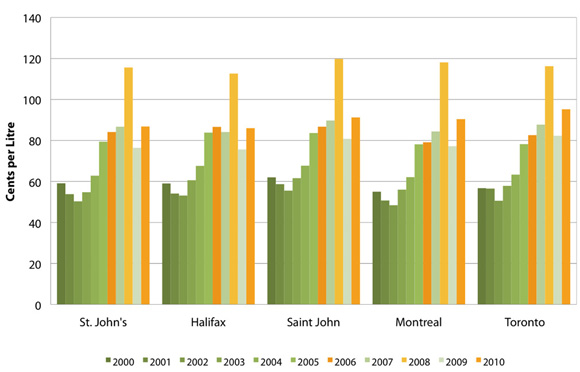 Natural gas markets in Canada and the United States operate as single integrated market. Events relating to weather, storage, transportation or infrastructure, however, have a direct impact on markets in many regions of North America. 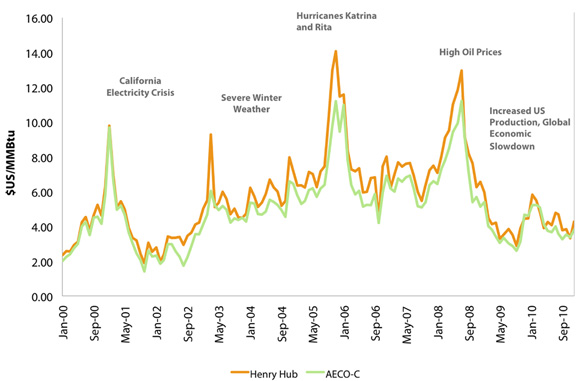 The following section provides a brief overview of natural gas prices over the 2000-2010 timeframe. 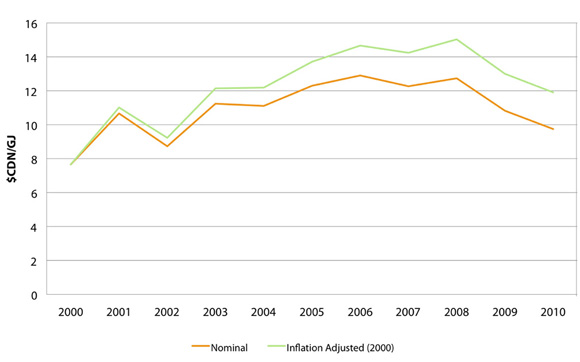 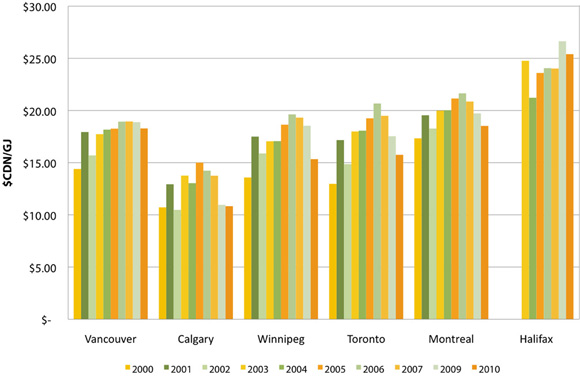 Total prices for natural gas in eastern Canada remain higher than western Canada, as markets in Ontario and Quebec rely on gas coming from the Western Canadian Sedimentary Basin (WCSB) and therefore transportation costs are higher. Markets in Atlantic Canada are able to access natural gas from the Sable offshore project; however, these markets are smaller and less mature therefore distribution costs are higher. Over the ten-year period, for consumers in Vancouver and Calgary, close to 60 per cent of their total bill was comprised of transportation and distribution, while consumers in Toronto and Halifax paid close to 70 per cent.

While oil markets are global and natural gas markets are generally continental, electricity markets are regional. Electricity prices vary by province or territory, primarily according to the type of available generation and the market structure (i.e. market-based or cost-of-service regulation). In general, the provinces that have large amounts of hydroelectric power have lower costs and have had less incentive to restructure their markets.

At the consumer level, electricity is typically priced per kilowatt-hour (kW.h) of consumption, with various service charges (mostly to cover the cost of transmission and distribution) added as fixed charges. Prices in most provinces and territories are set by the electricity regulator to cover costs and allow for a reasonable rate of return to investors. Ontario has chosen to partially restructure its electricity market, allowing market forces to determine a portion of the generation costs. Alberta, being a province largely dependent on thermal generation, has moved the furthest in restructuring its electricity market.

As of July 2010, the regulated residential rates in Alberta are entirely based on the electricity providers’ month-ahead costs. If the overall price level expectation for the next month changes, the prices that residents (who have not signed a retail contract) pay will change accordingly. Similarly, in Ontario, the regulated residential rates are determined twice each year by the Ontario Energy Board, and are set to reflect future cost expectations for all generation in the province. Ontario’s "regulated price plan" differs from Alberta’s "regulated rate option", in that it is set less often and has one price for the province, whereas Alberta sets a different price for each provider. 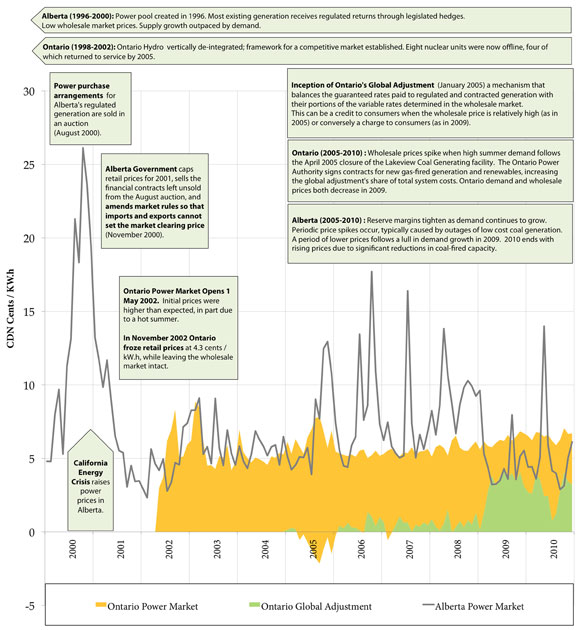 Power purchase arrangements for Alberta's regulated generation are sold in an auction (August 2000).

Ontario Power Market Opens 1 May 2002. Initial prices were higher than expected, in part due to a hot summer.

Inception of Ontario's Global Adjustment (January 2005) a mechanism that balances the guaranteed rates paid to regulated and contracted generation with their portions of the variable rates determined in the wholesale market.
This can be a credit to consumers when the wholesale price is relatively high (as in 2005) or conversely a charge to consumers (as in 2009).

Large consumers (i.e., industrial and commercial) are typically provided power at lower rates than residential consumers. However, in Alberta and Ontario large consumers buy directly from the wholesale market, and are thus subject to more price volatility than small consumers. These large consumers tend to pay the real-time cost of generation, and thus have more incentive to consume power only when it is economical, such as in off-peak periods. The commodity costs in other provinces are based on cost-of-service regulation of their utilities, and the price level is largely dependent on the types of generation available. For example, Quebec, British Columbia and Manitoba have systems dominated by hydro-electric generation, which for the most part produce relatively low-cost power. Other jurisdictions, such as the Atlantic provinces, have more diversified systems that are affected by changes in fossil fuel costs. The Atlantic provinces have implemented 'fuel-adjustment mechanisms' that allow the regulated utilities to pass-through fuel costs on a regular basis.

While prices have tended to increase in nominal terms across the country, inflation-adjusted residential costs have decreased in Manitoba and Quebec. Ontario has seen the most cost increases due to increased fuel costs, a commitment to use cleaner energy sources, and the need to reinforce its transmission system. Figure 10 shows residential consumer costs for selected cities. 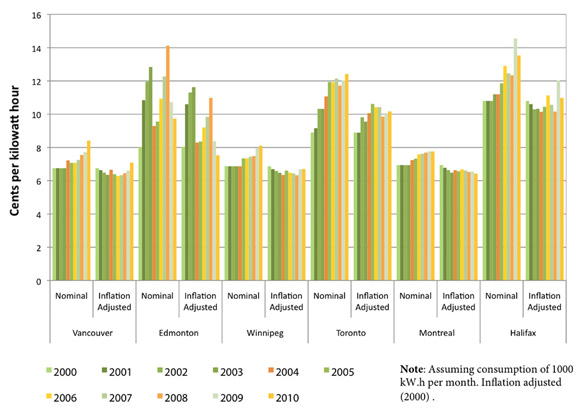