The National Energy Board (NEB or Board) is an independent federal regulator whose purpose is to promote safety and security, environmental protection and efficient infrastructure and markets in the Canadian public interest[1] within the mandate set by Parliament for the regulation of pipelines, energy development, and trade.

For oil and natural gas export licences, the Board’s role is to evaluate whether the oil and natural gas proposed to be exported is surplus to reasonably foreseeable Canadian requirements, having regard to the trends in the discovery of oil or gas in Canada.[2] The Board monitors energy markets, and provides its view of Canadian energy requirements and trends in discovery of oil and natural gas to support its responsibilities under Part VI of the National Energy Board Act (NEB Act). The Board periodically publishes assessments of Canadian energy supply, demand and markets in support of its ongoing market monitoring. These assessments address various aspects of energy markets in Canada. This Energy Market Assessment (EMA), Short-term Canadian Natural Gas Deliverability, 2014–2016, is one such assessment. It examines the factors that affect natural gas supply in Canada in the short term and presents an outlook for deliverability through 2016[3].

While preparing this report, in addition to conducting its own quantitative analysis, the NEB held a series of informal meetings and discussions with various industry and government stakeholders. The NEB appreciates the information and comments provided and would like to thank all participants for their time and expertise.

This report provides an outlook for Canadian natural gas deliverability[4] from the beginning of 2014 to the end of 2016. Over this period, deliverability is expected to rise gradually as declines in the output of dry natural gas are offset by rising production of more liquids-rich natural gas. Natural gas liquids (NGLs)[5] revenues supplement producer revenue when natural gas prices do not fully cover the costs of developing and producing the gas.

The 2013-2014 winter was colder than average in parts of Canada and the U.S. and significantly increased natural gas demand for space heating and power generation. To help meet the increased demand, natural gas was withdrawn from storage at a faster rate than in previous years. With more natural gas supply needed to refill storage before next winter, natural gas prices may remain higher than recent levels to displace some demands and encourage some additional production.

The Analysis and Outlook section of this report contains the key assumptions for each price case. The Appendices contain a detailed description of the methodology used in projecting deliverability.

Natural gas drilling activity in Canada has increased slightly sincee 2012 (Figure 3.2) and is expected to continue increasing in 2014. While Canadian marketable natural gas production declined steadily frome 2005 toe 2012, increasing solution gas production and production from deeper, higher productive, liquids-rich wells have since begun to outpace the decline in conventional production, especially from more shallow wells. As a result, it is expected that natural gas deliverability in Western Canada will slightly increase and Deep Panuke will increase Eastern Canada natural gas deliverability in 2014.

Three price cases for Canadian natural gas deliverability are examined in this report. These cases differ primarily in terms of Canadian and U.S. natural gas prices, and the corresponding levels of capital investment and drilling levels, in particular, drilling in Montney and Alberta Deep Basin tight gas as well as Duvernay and Horn River Basin shale gas. The Appendices contain a detailed description of the methodology used for projecting deliverability.

In all three cases, Canadian natural gas investment and drilling levels are projected to remain close to current levels in 2014. The cases diverge ine 2015 ande 2016 based on assumptions of continued divergence of Canada and U.S. supply and demand (Lower Price Case) or of gradual levels of tightening in the supply and demand balance (Mid-Range and Higher Price Cases).

A summary of the key assumptions used in the cases and the deliverability results is shown in Table 3.1:

For this analysis, the Board divides natural gas production in Western Canada into conventional, coalbed methane (CBM), and shale gas, with tight gas included as a sub-category of conventional production. Due to large regional differences in geological and production characteristics, the Board further subdivides these categories into smaller geographic areas, or regions, which have similar characteristics for production decline analysis. Within each region, grouping of the producing formations takes place on a geological basis. Details on the characterization of the resources are available in Appendix B. Canadian natural gas production outside of Western Canada includes: 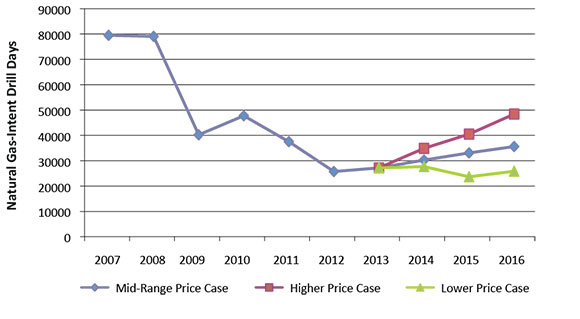 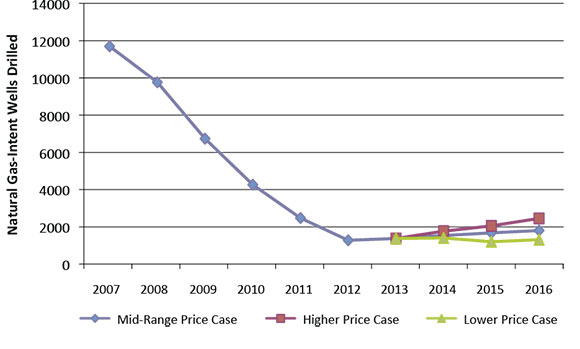 A Mid-Range Price Case would see moderate growth in Canada and U.S. natural gas demand, and slowing U.S. supply growth, gradually reducing excess deliverability in Canadian and U.S. natural gas markets with a steady rise in natural gas prices. This in turn will lead to increased drilling activity in Western Canada and a continued slow and steady production growth. Deliverability from Eastern Canada increases in 2013 and 2014 as Deep Panuke production increases. Solution gas production in Canada continues to increase with the increase in tight oil activity; however, growth slows towards the end of the projection as tight oil activity slows.

In the Mid-Range Price Case, Canadian natural gas deliverability will continue to be well above Canadian demand. Western Canada deliverability steadily rises as gas-directed activity increases with a continued focus on higher productivity wells. Tight gas and shale gas activity grows over the projection, with 393 wells drilled in the Montney and 21 in the Duvernay in 2016. Drilling in the Horn River Basin is minimal at 14 wells in 2016 – activity in this dry-gas resource could increase if additional markets emerge in Canada and the U.S. or if activity increases in preparation for LNG exports.

Canadian and U.S. gas markets were very well supplied at historically moderate prices for the past few years. These markets could find price conditions tighten because of continued low levels of gas drilling, rising natural gas demand, and the gas-storage deficit, which will require significant amounts of gas injection to reach average levels prior to the next heating season. Henry Hub prices rise by $0.62/MMBtu between 2013 and 2016.

The Higher Price Case includes an expectation of some market recovery for Canadian natural gas due to stronger economic growth and less displacement of Canadian gas by U.S. gas supplies. Power generators continue to prefer natural gas over coal in specific markets despite rising natural gas prices, potentially to meet stricter environmental regulations or to better match variations in the electricity demand profile. This results in a closer balance between deliverability and demand before the end of the projection period. As natural gas prices rise, there will be a continued increase in activity in liquids-rich plays, as well as additional activity targeting dry gas.

Canadian natural gas deliverability increases in 2014 due to Deep Panuke production increases, then declines to 385 106m³/d (13.6 Bcf/d) in 2016, but remains well above Canadian demand. Lower natural gas prices would further reduce the attractiveness of investment in the sector.

Canadian natural gas consumers would benefit from lower natural gas prices in the short term. However, this case also shows the greatest decline in natural gas deliverability, which has longer term implications for the market. Oil-related activity might be able to compensate for reduced natural gas operations to maintain Canadian drilling and service activity. The potential transition toward oil and away from natural gas would tend to shift some capital investment away from gas-focused B.C. and into oil-focused Saskatchewan, while the impact would be mixed in Alberta.

[a] Demand is equal to total primary natural gas demand less natural gas used in the field for fuel and processing. The demand projection is the Reference Case projection from the NEB report Canada’s Energy Future 2013.

The key difference from the previous projection is higher natural gas prices resulting from the colder than normal 2013-2014 winter and greater than expected withdrawal of natural gas from storage. The duration of this impact on natural gas markets is a key uncertainty for the projection.

Higher production than was projected reflects efficiency improvements such as drilling multiple wells from a single pad that reduced costs by allowing wells to be drilled more quickly. Initial production rates from wells continue to be strong, in both developed and newer gas plays, because of technology improvements, including more fracture stages per well.

Developments that will influence future Canadian and U.S. natural gas deliverability include:

A3 Decline Parameters for Groupings of Existing Gas Connections

A4 Decline Parameters for Groupings of Future Gas Connections

B1 Factors for Allocation of Gas-Intent Drill Days to Areas

B2 Detailed Gas-Intent Drilling and Gas Connection Projections by Case

[1] The public interest is inclusive of all Canadians and refers to a balance of economic, environmental, and social considerations that change as society's values and preferences evolve over time.

[2] Section 118 of the National Energy Board Act: On an application for a licence to export oil or gas, the Board shall satisfy itself that the quantity of oil or gas to be exported does not exceed the surplus remaining after due allowance has been made for the reasonably foreseeable requirements for use in Canada, having regard to the trends in the discovery of oil or gas in Canada.

[3] The Board prepares a series of reports that provide assessments of natural gas and oil resources in the ground, such as The Ultimate Potential for Unconventional Petroleum from the Montney Formation of British Columbia and Alberta. The deliverability analysis is the next step in the process, as it projects how much of those resources in the ground are able to be drilled, developed and produced within a specific time period.

[4] Deliverability is the estimated amount of gas supply available from a given area based on historical production and individual well declines, as well as projected activity. Gas production may be less than deliverability due to a number of factors, such as weatherrelated supply interruptions, and shut-in production due to economic or strategic considerations.

[5] NGLs are liquid hydrocarbons including propane, butanes, and pentanes plus. Natural gas containing commercial amounts of NGLs is known as NGL-rich, liquids-rich or wet gas. Dry natural gas contains little or no NGLs. Gas produced from oil wells includes gas in solution within the oil (solution gas) and gas adjacent to the oil within the reservoir (associated gas). Production of solution gas and associated gas is almost entirely dictated by oil operations, and is typically not influenced by natural gas market conditions.

[7] Marketable (sales) gas is gas that has been processed to remove impurities and NGLs, and meets specifications for use as an industrial, commercial, or domestic fuel.

[11] Alliance Pipeline Ltd. constructed the Tioga Lateral, a 79.3 mile long, 12 inch diameter pipeline that transports natural gas being produced in association with Bakken oil production to a tie-in along the existing Alliance Mainline.