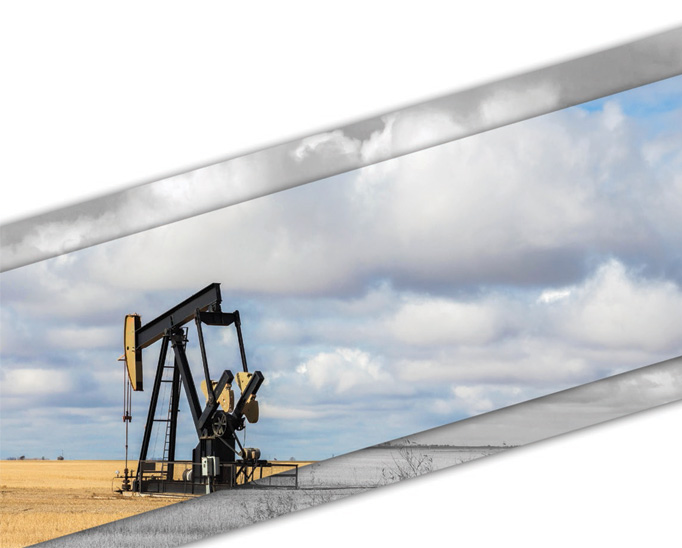 Quoted North American oil prices are the West Texas Intermediate (WTI) price at Cushing, Oklahoma, which is considered a benchmark of U.S. crude oil prices, and are given in $US/bbl in constant 2014 dollars. Canadian oil prices quoted are the Mixed Sweet Blend (MSW) price at Edmonton, Alberta (often reported as Edmonton Par) and the Western Canadian Select (WCS) price at Hardisty, Alberta. MSW is the conventionally produced light sweet crude benchmark for western Canada and WCS is the benchmark blended heavy oil for western Canada. Both are listed in $C/bbl. The Alberta Oil Price is a weighted average price of heavy and light oil with 60 per cent light MSW price and 40 per heavy WCS price. The average price is weighted like this because over the last decade about 60 per cent of conventional, tight, and shale oil production is light and the remainder heavy.

The National Energy Board (NEB or Board) is an independent, federal, quasi-judicial regulator established to promote safety and security, environmental protection and economic efficiency within the mandate set by Parliament for the regulation of pipelines, energy development and trade. The Board's main responsibilities include regulating the construction, operation and abandonment of pipelines that cross international borders or provincial/territorial boundaries, as well as the associated pipeline tolls and tariffs, the construction and operation of international power lines, and designated interprovincial power lines and imports of natural gas and exports of crude oil, natural gas liquids (NGLs), natural gas, refined petroleum products and electricity.

While preparing this report, in addition to conducting its own quantitative analysis, the NEB held informal meetings and discussions with various industry and government stakeholders. The NEB appreciates the information and comments provided and would like to thank all participants for their time and expertise.

This is the first edition of the NEB’s Short-term Western Canada Conventional, Tight, and Shale Oil Deliverability report. Similar to the NEB’s annual Short-Term Canadian Natural Gas Deliverability report, which has over 10 editions, this report provides a three-year (including year of release) outlook on expected production levels. The oil deliverability projection includes light oil and heavy oil supply from British Columbia, Alberta, and Saskatchewan, and light oil supply from Manitoba. Oil deliverability in this report does not include oil sands bitumen or synthetic crude oil production, or oil production from other regions of CanadaFootnote 2.

Oil prices, capital expenditures, and well production are analysed and combined with expected resource development to project future oil deliverability from western Canada. Oil production and wells are split into categories by area, class, type, and groups of geological formations. The areas are based on PetrocubeFootnote 3 oil production areas for western Canada. The class of oil is either heavy or light. The type of oil is considered to be either conventional, tight, or shale. Further details on these categories, including formation groups, are included in Appendix A. This is the first time the NEB has provided historical or projected oil production arranged by these specific categories.

Due to their unique production profiles, wells that are part of thermal (steam injection) projects in conventional heavy oil pools, or carbon-dioxide flooding (CO2-EOR) projects are considered in separate analyses. Details are in Appendix C.

This report provides an outlook of western Canadian conventional, tight, and shale oil deliverabilityFootnote 4 from the beginning of 2015 to the end of 2017. The outlook presents three distinct cases: a Higher Price Case, Mid-Range Price Case, and a Lower Price Case, each of which are based on a set of assumptions. 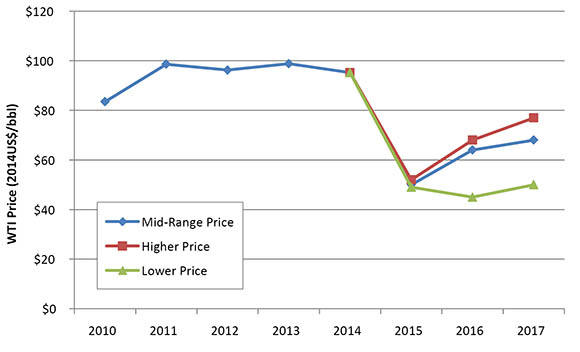 Since 2009, the application of horizontal drilling and multi-stage hydraulic fracturing has dramatically increased the productivity of previously low-producing or unproductive oil reservoirs in the Western Canada Sedimentary Basin (WCSB) and in the United States. Surging U.S. oil production, in combination with growth in oil supply from Canada, Saudi Arabia, Iraq, and Russia, led to oversupplied markets in early 2014. The result is significantly lower crude oil prices in 2015 compared to oil prices in the first half of 2014.

Numerous technological advancements in drilling and production methods related to hydraulic fracturing have allowed WCSB operators to increase their reserves and add to known western Canadian resources. Additions to crude oil reserves in conventional oil reservoirs has also been achieved through the application of a number of different enhanced oil recovery (EOR) techniques such as water, polymer, alkaline, or CO2 flooding, and thermal methods such as the application of steam-assisted gravity drainage (SAGD) in conventional heavy oil reservoirs. Several projects in western Canada, existing and proposed, are designed to capture CO2 and distribute it to oil pools to enhance oil recovery. There are currently two such projects in operation in Saskatchewan, and one in Alberta. Ten thermal and three CO2 flooding projects are included in the analysis. More details can be found in Appendix A1.1.5.

Between 2002 and 2007, the overall average initial productivity (IP) of oil wells drilled in Western Canada decreased as conventional resources matured, however the trend reversed upward from 2008 to 2014. It is expected to continue increasing over the projection period as the more productive conventional and tight wells represent a growing share of the wells drilled in a year. Details are in Appendix A2.

Lower oil prices and revenues have led to decreased capital expenditures, which has reduced drilling and service activity as companies work within available cash flows. When producers are cash-strapped, development is focused on the most economic prospects in an attempt to reduce costs. The outcome of these measures is not only lower costs for extracting oil, but improved overall operational efficiencies and higher levels of production per well.

Lower prices for both crude oil and natural gas have also affected the credit ratings of small and mid-size producers, making it more difficult for them to obtain financing. The lack of easy access to capital could make it difficult for some small and mid-size producers to sustain their operations, creating the potential for bankruptcies or acquisitions by more financially stable companies.

Three price cases for western Canadian oil deliverability are examined in this report, with the individual price tracks based on various energy forecasts and the forward oil price stripFootnote 8. However, the projected outcomes in the three cases differ in terms of oil prices with resulting differences in the levels of capital investment. Table 1 and the Appendices contain a detailed description of the assumptions used for projecting deliverability.

In all three price cases, combined drilling and investment in western Canadian conventional, tight and shale oil is projected to decrease significantly relative to 2014. The cases differ more in 2016 and 2017 based on the diverging price assumptions.

A summary of the key assumptions used in the cases, along with the deliverability results are shown in Table 1. 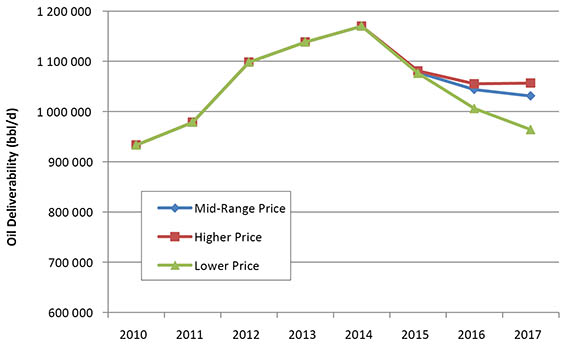 For this analysis, the Board divides oil production in western Canada into heavy and light classes, and further subdivides into conventional, tight, and shale oil types. Because of large regional variation in production characteristics, the categories are also sub-divided into smaller geographic areas, or regions, which have similar production decline characteristics. Within each region, the producing formations are grouped based on their geological characteristics. Details on the oil categorizations are in Appendix A.

These deliverability outcomes arise from differing levels of drilling activity that are a consequence of variations in capital investment between the three cases. Comparisons of oil drilling activity in terms of drill days and oil wells drilled, are shown in Figure 3 and Figure 4, respectively. 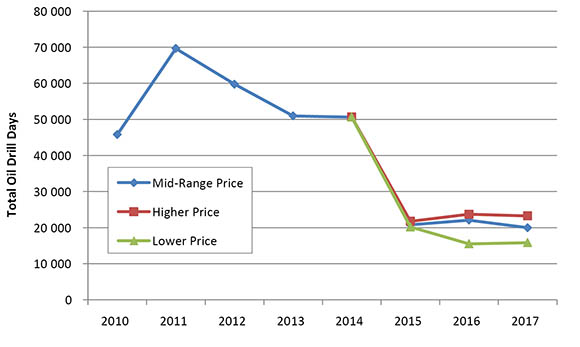 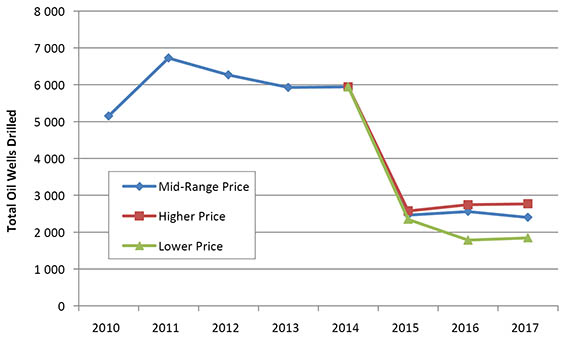 This case reflects and maintains current trends over the projection period. Prices in 2016 and 2017 are higher, consistent to keep production from dropping below balanced levels.

The Mid-Range Price Case outlines a decline in deliverability (Table 2) over the projection period, with the decline slowing down in 2017 as prices rise and oil activity continues to focus on higher productivity wells. In 2010, tight oil production was 12 per cent of western Canadian conventional, tight, and shale oil production. As technology changed and focus on tight resources grew, that portion increased to a third of production in 2014 and remains at a third over the projection. In 2009 there were 869 tight oil wells drilled and, in 2014, there were 3 421 tight oil wells drilled. Between now and 2017, the Mid-Range Case projects tight oil wells will account for half of the oil wells drilled in western Canada. A summary of the Mid-Range Price Case is available in Table 2 and Figure 5. Detailed well and production projections including thermal projects are included in Appendix C. 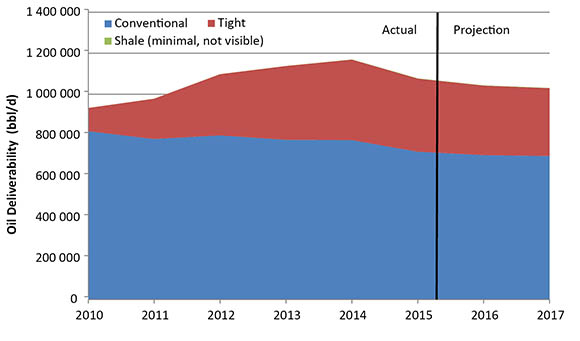 The Higher Price Case projects higher global oil prices over the projection period than the Mid-Range Price Case, leading to more drilling activity and production. Deliverability declines in 2015 and 2016 but starts to increase slightly by 2017, as shown in Table 3. Higher prices and resultant revenues eventually drive capital spending and activity high enough to slightly boost production from new wells above the decline in production from existing wells. 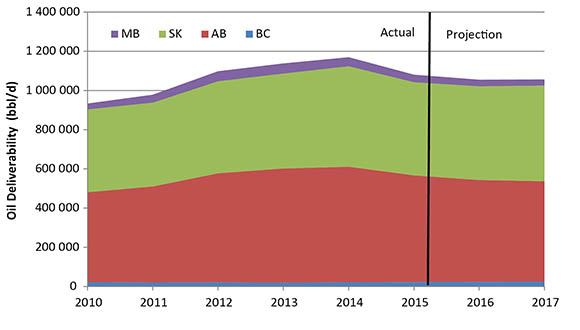 In the Lower Price Case, global demand growth for crude oil remains weak and/or global oil production growth remains strong, keeping WTI prices from rising above $50.00/bbl over the projection (Table 4). It is projected that Canadian producers will have difficulty obtaining debt financing while private equity investment is minimal over the projection.

Western Canadian oil deliverability decreases over the projection, however the proportion of heavy oil production increases from 43 per cent in 2014 to 46 per cent in 2017 as heavy oil production from thermal projects continues to grow, as seen in Figure 7. Thermal developments have long production lifespans and low sustaining capital costs and are still viable in a low oil price environment; however, thermal development momentum is lower in the Low Price Case compared to the other two price cases. Details are available in Appendix C. 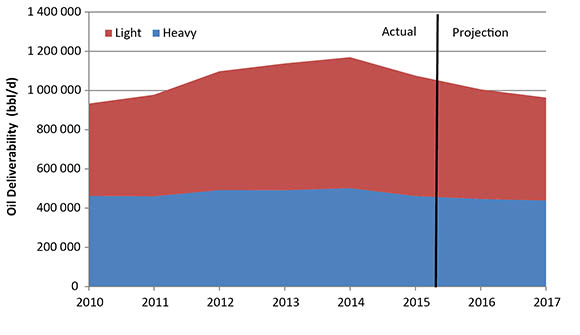 The NEB’s Energy Future report includes projections of bitumen and synthetic crude oil, and projections of oil production from other regions of Canada. The 2015 edition will be released in Fall 2015. The 2013 report is available here.

Deliverability is the estimated amount of oil supply available from a given area based on historical production and inasideidual well declines, as well as projected activity. Oil production may be less than deliverability due to a number of factors, such as weather-related supply interruptions, and shut-in production due to insufficient demand, strategic considerations or economics.

When the amount of investment capital available to industry tightens, producers and service companies attempt to reduce costs while focusing their drilling efforts on the most economic prospects–this is commonly referred to as ‘high-grading’.

Forward price is the fixed price or rate at which the transaction scheduled to occur at the expiration of a forward contract will take place. This price is agreed upon at the initiation date of the contract.

Note that shale volumes are too low to be detected at this scale, but are provided in tables in Appendix C.