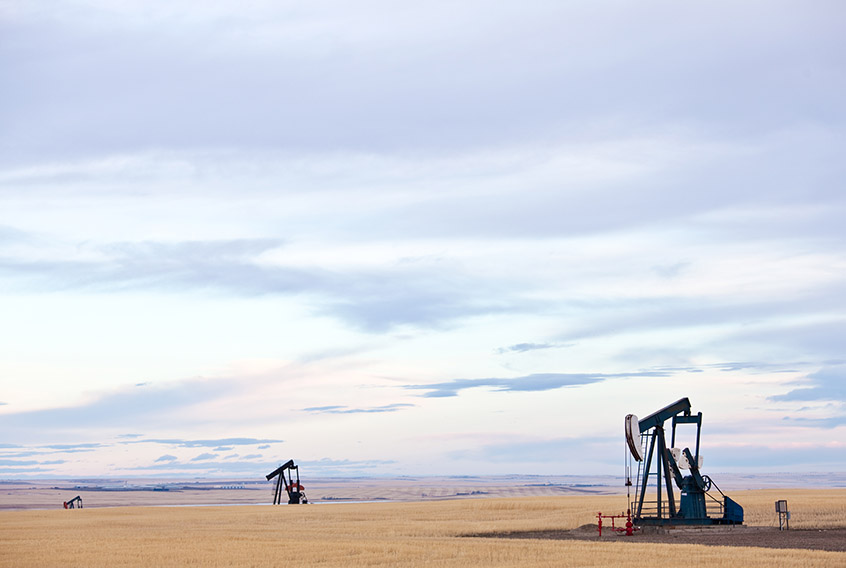 An oil production projection is the future production capability from a group of wells as determined by the production characteristics of each well, not accounting for reductions in actual production due to weather conditions, low oil prices, equipment failure, or other potential production interruptions. It equals the production capability of a well multiplied by the expected number of wells. The oil price outlook applied to overall production provides the revenue available to the industry. The reinvestment of a portion of the revenue as capital expenditures enables the industry to drill new wells.  The capital expenditures divided by the daily cost of drilling provides the number of drill days available in a year. The number of new wells drilled in each year is equal to the number of drill days per year, divided by the number of days required to drill and complete an average well. The projected production performance of an average well is based on historical performance, specifically on how the initial production (IP) rates and decline rates change over time.

For this analysis, western Canada is disaggregated into groupings based on geography and stratigraphy.  The number of producing wells and well performance, both historical and projected, are analysed for each grouping. The production projections for all groupings are then summed to determine total western Canadian production. Details on how western Canada is disaggregated into groupings are in Appendix A1.1. The methods used to determine well performance are discussed in Appendix A1.2. The results for each grouping, including IP rates and decline parameters, are in Appendix B and Appendix C.

A1.1 Groupings for Production Decline Analysis

To assess oil deliverability for western Canada, oil production and wells are split into various categories as shown in Figure A1.2. Splitting out western Canada by area, class, type, and grouped geological formations resulted in 250 total groupings, which are listed in Appendix A3.2. Of the 250 groupings, approximately 150 have, or have had, producing wells and thus historical production. The remaining groupings are placeholders for potential future development.

Oil wells and production are grouped geographically based on petroCUBEFootnote 1 areas for Alberta, B.C., Saskatchewan, and Manitoba, as shown in Figure A1.3. The Lloydminster area is further broken down by province. There are 10 areas in Alberta and three in Saskatchewan. Northeast BC is considered one area, as is Southwest Manitoba. 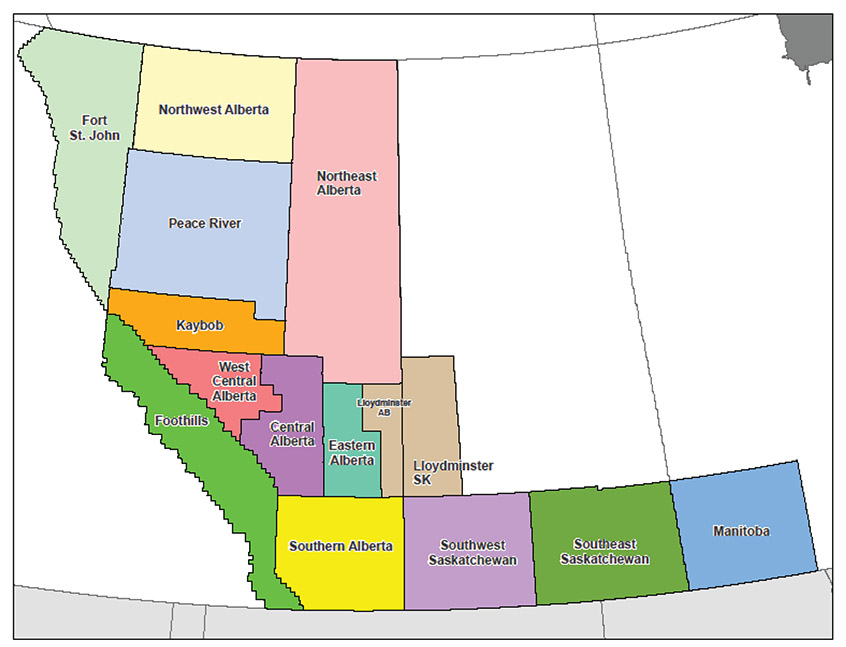 Each provincial regulator has its own criteria for classifying crude oil as light, heavy, extra-heavy, or medium. For this report, consistent with NEB practice, oil production has been categorized into only two classes: light and heavy.

The classification of Saskatchewan oil wells is based on their oil density and geographic area. Lloydminster wells have historically been classified by the Saskatchewan regulator as heavy when their oil production has a density greater than 945 kg/m3 (18.1 API). Light oil in the Kindersley area has a density ranging between 840 and 875 kg/m3 (36.8 and 30.1 API) while heavy oil in this area ranges between 949 and 996 kg/m3 (17.5 and 10.4 API). Swift Current area wells with oil production densities ranging between 885 and 997 kg/m3 (28.2 and 10.3 API), are classified as medium by the provincial regulator, but for this report they are classified as heavy for greater consistency with the categories of other provinces. Oil wells in the Estevan/Weyburn area that are classified as light by the provincial regulator were also classified as light in this report, and have oil densities ranging from 760 to 896 kg/m3 (54.5 and 26.3 API). Estevan/Weyburn wells classified as medium by the provincial regulator are classified in this report as heavy if the well is a conventional oil well and light if the well is a tight oil well because crude oil developed like tight oil in Saskatchewan tends to be on the much lighter side of medium (see section A1.1.2 for information on well types). Historically, these wells have had oil densities ranging from 827 to 956 kg/m3 (39.4 to 16.4 API). Wells with missing classification or density information are classified as light or heavy based on the area.

Once an oil well is classified as light or heavy, it is further categorized as either conventional, tight, or shale.

An oil well is classified as tight if it is a horizontal well that produces from the following formations and was drilled after a certain date:

An oil well is considered shale oil if it is horizontal, drilled after 2007 in Alberta and is producing from the Duvernay Formation.

There are thousands of stratigraphic horizons identified in the well data from the WCSB. This report aggregates these horizons into broader geologic zones, or groupings of formations. The geologic zones are:

These geologic zones may be further aggregated into groupings of particular formations, based on criteria such as the area, similar well characteristics or number of wells.

Within each grouping, oil wells were grouped by well year, with all wells drilled prior to 1999 forming a single group, and separate yearly classifications for each year from 1999 and on. Thus, for each grouping, average well performance can by analysed over time to see how IP rates and declines change as the resource is developed and as technology evolves.

There are other existing and potential EOR projects in western Canada that may be analysed as individual groupings in future editions of this report.

A1.1.6 Oil Production from Gas Wells

For this report, historical production data was analysed to determine production declines which were then used to determine future performance. In some cases, newer tight and shale oil development historical data is more limited and production decline trends are not as established. Information gathered during consultations with industry, when possible, and from publicly available data played a larger role in establishing expected well performance for these newer tight and shale oil groupings.

The data sets used to estimate group decline parameters are generated by the following:

The data sets used to determine average well decline parameters are generated by the following:

After the average well’s historical production for each grouping and year is determined, each average well is evaluated in sequence, from 2000 through 2016.

a) Production Decline Analysis for the Average Well:

For each well year, the daily rate versus cumulative production plot for the average well is evaluated first to establish:

Figure A1.4 shows an example of the plots used to evaluate average well performance, and the different decline rates that are applied to describe the production. 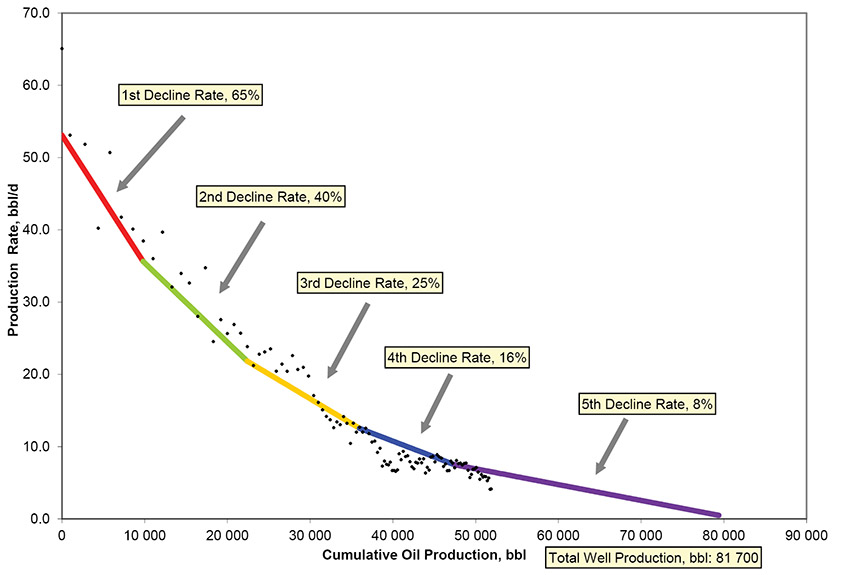 The estimated decline parameters for average wells are available in Appendix A4.

b) Production Decline Analysis for the Grouped Data:

Figure A1.5 – Example of a Group Production Decline Analysis Plot 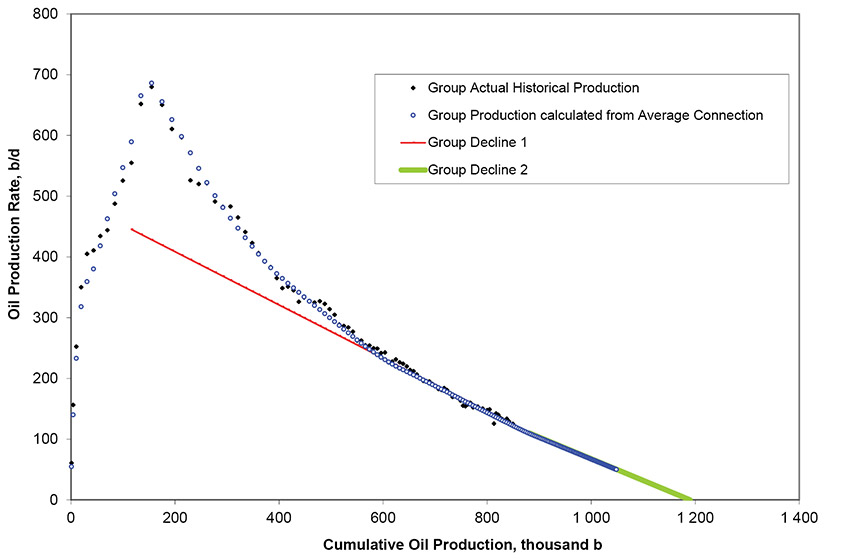 The following group performance parameters are determined from the plot of calculated and actual production:

A1.2.1 Methods for Existing Wells

In this report, “existing wells” are those brought on production prior to 1 January 2017. Group decline parameters are used to project oil production for existing wells.

In groupings of older wells (2001, 2002, etc.), actual group production from recent years is usually stabilized or is near the terminal decline rate established by the pre-1999 aggregate grouping. In these cases, a single decline rate sufficiently describes the entire remaining productive life of the grouping and the expected performance of the calculated average well has little influence over determination of the group parameters.

In groupings of wells drilled more recently (2014, 2015, etc.), actual group production history data is unlikely to provide a good basis upon which to project future oil production. In these cases, the expected performance of the average well is more speculative with respect to the applicable current and future decline rates.

Group performance parameters are available in Appendix A3.3.

A1.2.2 Methods for Future Wells

The performance of future wells is obtained for each oil grouping by extrapolating the production performance trends for average wells in past years, namely initial productivity of the average well and its associated decline rates.

In some groupings, the initial productivity of the average oil well decreases over time. Recently however, some conventional and tight groupings have average oil wells with initial productivity which has been increasing due to technology, as displayed in Figure A1.6. This graph shows the IP rates for oil wells in the Peace River Light, Tight, Colorado, Mannville, Jurassic, Triassic  grouping. The IP rate for future oil wells is estimated by extrapolating the trend in each oil grouping, taking into account technological trends and possible recovery constraints. Historical and projected initial productivities for average wells for future oil groupings are in Appendix A4.1 and A4.2. 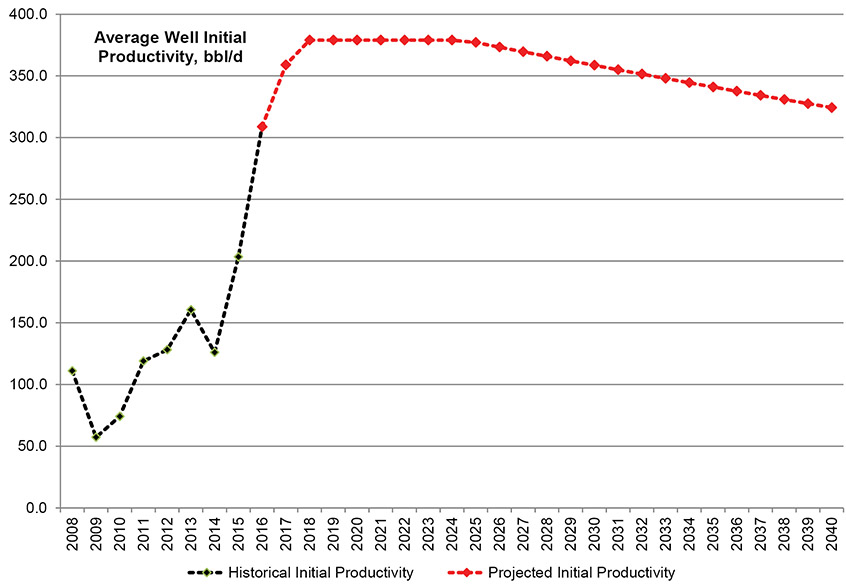 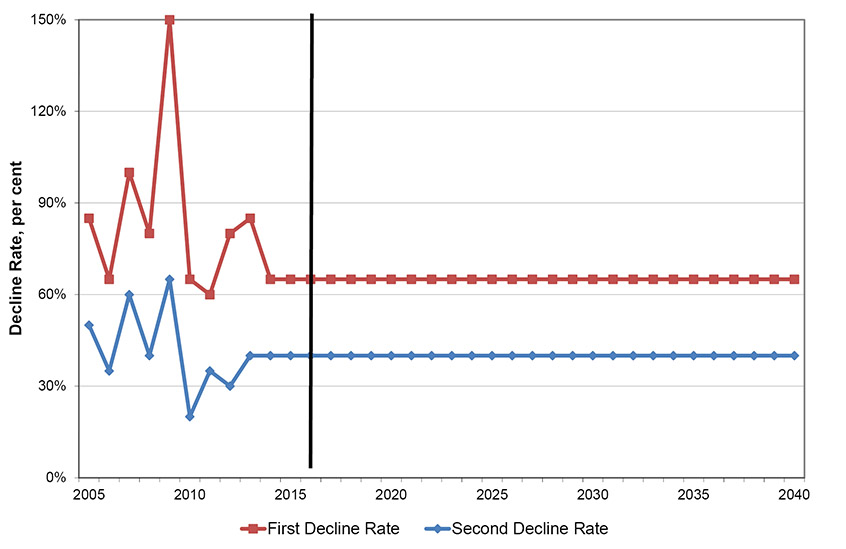 Projecting the number of future wells requires an estimate of the annual number of oil wells to be drilled and placed into production for each grouping.

Figure A1.8 is the flowchart describing the methodology for projecting the number of oil wells for each year over the projection period. The key inputs are Annual Drilling Investment, Costs per Drill Day and Days to Drill a Well. Adjustments to these three key inputs (shown as yellow boxes in Figure A1.8) produce different projections of drilling activity in the WCSB. Other required inputs are shown in the green boxes in Figure A1.8.  The values for these other inputs are estimated from an analysis of historical data.

The number of oil wells drilled in each year for a grouping is calculated by dividing the drill days targeting that grouping, by the average number of drill days per well. 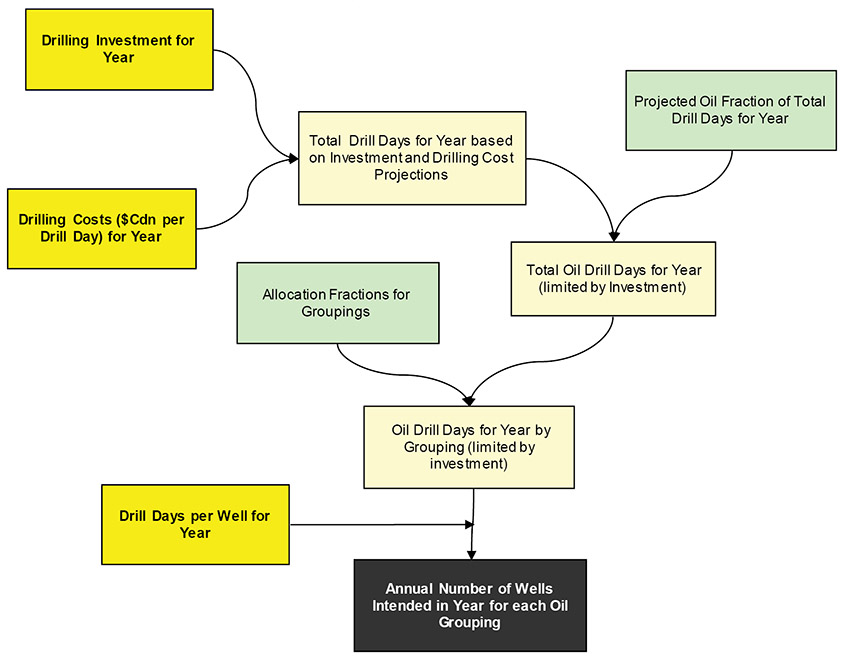 A2.1 Production from Existing Oil Wells

The decline parameters describing the expected future production of each grouping are in Appendix A3.3.

The future production projected for these groupings represents the production that would occur from the WCSB if no further oil wells were added after 2016.

A2.2 Production from Future Oil Wells

The overall trend for initial productivity of the average oil well in the WCSB is shown in Figure A2.1. Between 2002 and 2007, initial productivity decreased as conventional resources matured, however the trend reversed upward from 2008 to 2015 given the focus on deeper resources. The average IP dropped in 2016 as a result of increased number of shallower wells (which have lower productivity rates) drilled in SK; stays level until 2025; and then starts to decline slowly as the resource matures and there are fewer sweet spots to target.

Figure A2.1 – Average Initial Productivity of all WCSB Oil Wells by Well Year 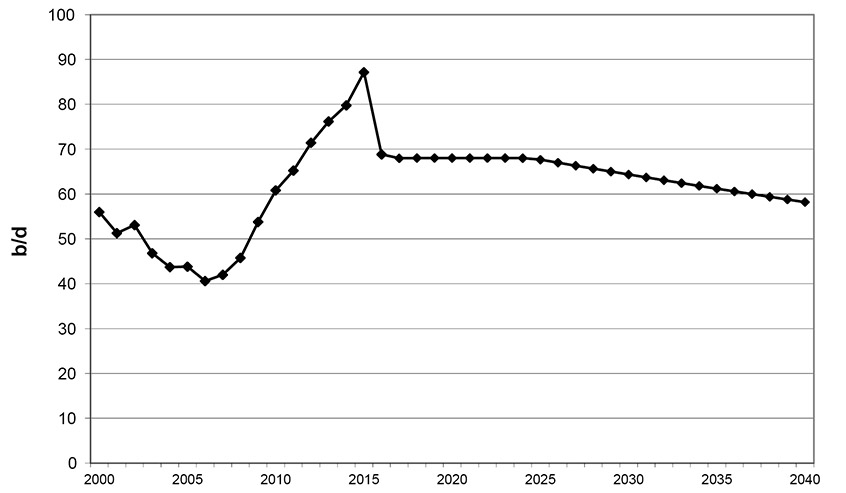 Table A2.1 shows the historical average IP rates for the average oil wells for each area.

Projected average well performance is the same in all six cases assessed for this report. Overall production varies between the cases as a result of differing levels of oil drilling activity, as discussed further in the next section.

Drilling activity in a case depends on the assumed oil prices in that case. Figure A2.2 indicates the projected number of oil wells for all groupings in each case.

Appendix B contains detailed tabulations of projected annual oil drill days and oil wells for each grouping, by case. 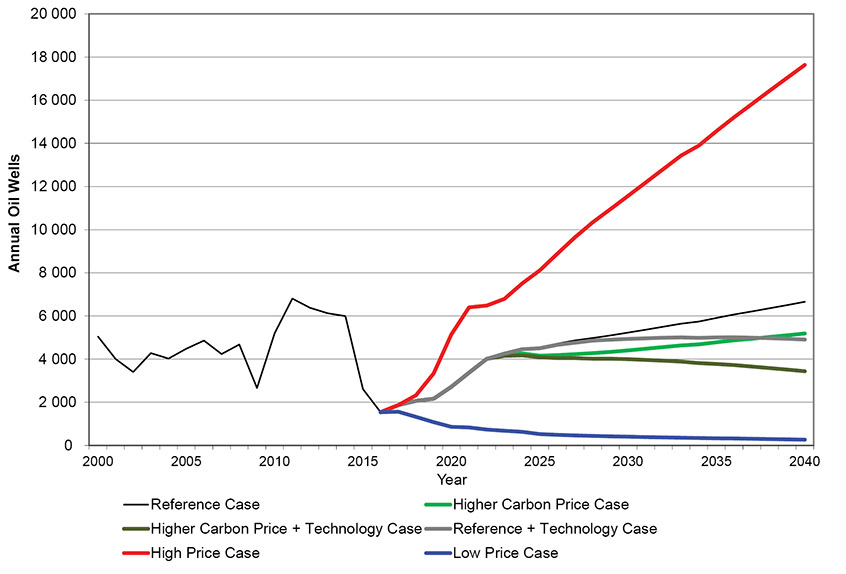 A2.3 Thermal and CO2 Oil Projects

As indicated in Appendix A1.1.5, oil production projections for the thermal and CO2 enhanced oil recovery (EOR) projects are based on extrapolation of prior trends and currently announced plans of producers. Production from EOR projects in SK grows substantially over the projection.

PetroCUBE is an production analysis service, from geoLOGIC Systems.

The American Petroleum Institute gravity, or API gravity, is a measure of how heavy or light a petroleum liquid is compared to water.