Canada’s Energy Future 2016: Energy Supply and Demand Projections to 2040 provides projections of Canadian energy supply and demand to the year 2040. Canada’s Energy Future 2016 includes a baseline projection, the Reference Case, based on the current macroeconomic outlook, energy price projections, and government policies and programs that were law or near-law at the time the report was prepared. EF 2016 includes additional projections that vary assumptions on energy prices, energy markets, and infrastructure. For detailed information on Energy Demand, see Chapter 4 of the full report.

Total end-use energy demand increases by an average of 0.7 per cent per year. 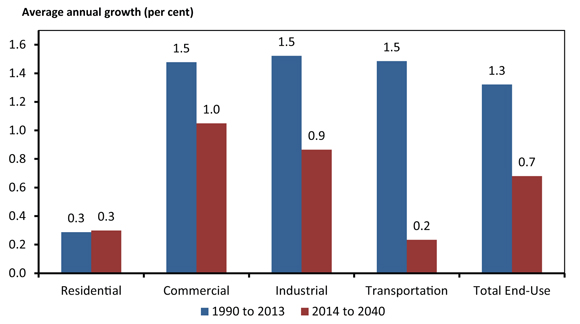 Energy demand grows slightly faster in the High Price Case, with an average annual rate of 0.8 per cent per year over the projection period. Generally, higher prices decrease energy demand growth as energy is more expensive for consumers. However, this effect is more than offset by higher demand in the oil and natural gas sector. The Low Price Case demand projection is lower than the Reference Case, with growth averaging 0.6 per cent per year. The increased demand growth resulting from lower prices is more than offset by lower activity in the energy industry.