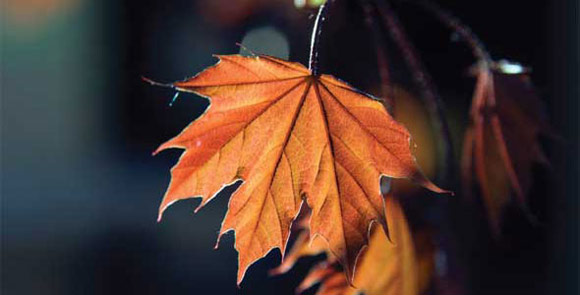 The 2007 Energy Futures Report, Canada's Energy Future, is firmly grounded in today's energy realities. It is also a call for the engagement of Canadians in confronting pressing energy issues before us. The challenges ahead include: high and volatile energy prices; continuing geopolitical unrest; decreasing conventional reserves; the need to diversify supply; an ageing and constrained delivery infrastructure; and growing environmental concern. All of these considerations have contributed to the National Energy Board's (NEB or the Board) development of Canada's Energy Future.

Scenarios - What are they and why are they useful?

A scenario is a self-contained story about how the future could unfold. A scenario is much different than a sensitivity analysis, which investigates how outcomes will change based on changes in key assumptions. In a scenario, all the key assumptions are subject to change. Scenarios help create plausible actions and outcomes based on context. It encourages cause and effect thinking. This, in turn, supports a long-term, coordinated response.

To better respond to the needs of its varied stakeholders, the Board has adopted a hybrid approach in this report. The hybrid approach is a combination of a near-term outlook and long-term scenarios. It is a progression from the previous report[8], which used two contrasting scenarios: 'Supply Push' and 'Techno-Vert'. The methodological change is in response to stakeholder comments on the previous report, which recommended incorporating a baseline Reference Case and investigating a broader scope of uncertainties and issues in scenarios.

Scenarios Used in this Report

The use of scenarios provides varying perspectives on Canada's energy evolution. Energy scenarios are not forecasts or predictions, but rather plausible outcomes that describe a range of potential futures. There are many scenarios that could represent plausible energy market futures. Three scenarios were chosen to represent three distinct settings for the storylines presented in the 2007 report (Figure 1.1). These three scenarios are designed to: 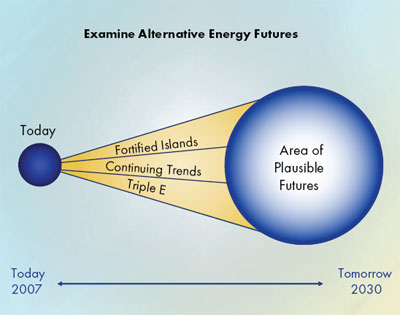 The three scenarios vary according to government policies and programs, geopolitical context, societal values, energy prices, macroeconomic growth rates, and the pace and type of technological developments. However, significant trends and relationships are maintained across all scenarios. Some of the commonalities include a desire for forward progression on environmental issues, continued importance of the Canada-U.S. trading relationship, the role of governments in Canada, increasing global demand for energy using goods and services, and the continued decline of energy supply within Organization for Economic Cooperation and Development (OECD) countries. No individual scenario was considered to be more probable than the others.

The scenarios in this report are:

Many of the drivers used in the 2003 report are still relevant today and therefore, continue to influence the selected scenarios in 2007. The distinguishing factor in this analysis is the strong influence of the global context. Scenarios are characterized by prevailing world views, rather than a distinctly Canadian setting. Energy commodities are traded on international markets and Canada is subject to the same risks and benefits as others. These are incorporated in the analysis through variant price trajectories for energy commodities.

Greater detail on each of the three scenarios is provided in later chapters.

The Board sought the views of Canadian energy experts and interested stakeholders through a series of consultation sessions across Canada in 2006 and early 2007, including representatives from the energy industry, government, environmental non-governmental organizations, and academia. The views collected helped shape the report methodology, assumptions and analysis. Through these consultation sessions, valuable background information was gained[10].

[10] Consultation summaries are available on the NEB website at www.neb-one.gc.ca.

The structure of this report reflects the analytical approach adopted. The 'Energy Context' provides a backdrop to the report, through a brief discussion of issues of importance currently facing the energy sector in Canada. The Reference Case and scenario analyses are detailed under four separate chapters. Each of these chapters contains extensive results for individual energy commodities and related issues, including economic context and environmental implications. Finally, the last chapter summarizes key insights and implications under five major themes. Detailed tables on various energy demand and supply elements for each provincial and territorial jurisdiction are available in the appendices.