TGS, PGS and MKI propose to conduct an offshore marine seismic survey in Baffin Bay/Davis Strait. The proposed Project is expected to be carried out over five years during the open water season beginning in 2013. TGS, PGS and MKI have applied to the National Energy Board (NEB) for a geophysical operations authorization (GOA) for the Project under the Canada Oil and Gas Operation Act (COGOA).

This letter updates the process information dated 13 July 2011 and 11 October 2011. In these past letters, the NEB committed to provide a draft environmental screening report for public comment under the Canadian Environmental Assessment Act. That act has since been repealed however and replaced with the Canadian Environmental Assessment Act, 2012 (CEA Act 2012). Although the Project is not subject to the CEA Act 2012, the NEB is continuing its environmental assessment of the Project under the COGOA and is releasing a discussion paper. The discussion paper is appended and provides information regarding the Project and will guide discussions at community meetings where oral comments will be heard.

The public meetings will be held from 7:00 to 9:00 pm in the following communities:

Representatives from the company will be present at the public meetings to present information about the Project and answer questions regarding the Project.

The NEB will also be accepting written comments from the public on issues relevant to this Project, particularly the potential environmental effects and mitigation measures outlined in the discussion paper. Written comments must be submitted by 3 May 2013 by Email at ExproEA@cer-rec.gc.ca or by mailing them to the National Energy Board, 444 Seventh Avenue SW, Calgary Alberta  T2P 0X8, Attention: Team Leader Conservation of Resources.

Under section 15 of the National Energy Board Act, the NEB authorized Board Member David Hamilton to report and make recommendations on the Project application. Written comments from the public and information gathered from community meetings will inform Mr. Hamilton’s report and recommendations to the NEB. The NEB will then decide whether to approve or deny the Project application.

Sheri Young Secretary of the Board

PGS and TGS want to conduct a seismic survey in Baffin Bay and Davis Strait each open water season (July-Nov) for up to five years beginning in 2013 (the Project). MKI is a wholly-owned subsidiary of PGS and would be the company that operates the Project if it is approved. TGS, PGS and MKI have applied to the National Energy Board (NEB) for a geophysical operations authorization (GOA) for the Project under the Canada Oil and Gas Operation Act (COGOA).

This paper provides information regarding the Project to facilitate public comments on it. Interested parties are invited to submit written comments to the Board and/or provide oral comments at community meetings. Written comments must be submitted by 3 May 2013 by Email at ExproEA@cer-rec.gc.ca or by mail to the National Energy Board, 444 Seventh Avenue S.W., Calgary, Alberta,  T2P 0X8, Attention: Team Leader, Conservation of Resources.

You can access documents related to the environmental assessment of the Project on the Public Registry.

As shown in the diagram below (Figure 1), the survey would involve a seismic survey ship travelling back and forth across the area shown in the map below (Map 1) towing an array of airguns that produce pulses of sound waves under the water. The sound waves pass through the water and into the rock below the seabed. The reflected sound waves from the rock layers are detected and recorded by listening devices on the streamers called hydrophones, which are also towed by the seismic survey ship. The loudness of the airguns is estimated to be 230 decibels at a distance of 1 meter away, and will be repeated every 13 to 15 seconds, 24 hours a day while operating. See Appendix 1 for further details. 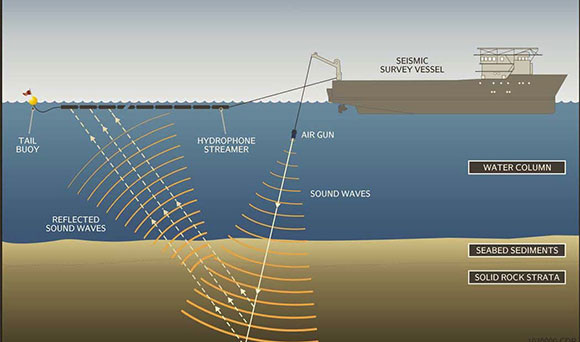 The proposed Project will occur seaward of Canada’s 12 nautical mile boundary and outside of the Land Fast Ice Zone to the Greenland border (See Map 1 below). The northern extent of the seismic survey is approximately 180 km from the mouth of the proposed Lancaster Sound National Marine Conservation Area extending south to the 60 N parallel. The majority of the Project will be conducted in deep waters (ranging from 360 m to 3,660 m), covering an area of approximately 16,173 linear kilometres.

The Nunavut Planning Commission determined on 19 January 2011 that the proposed Project falls outside the boundaries of the North Baffin Regional Land Use Plan and that no conformity review with the approved plan is required; consequently the Project was not forwarded to the Nunavut Impact Review Board for screening. 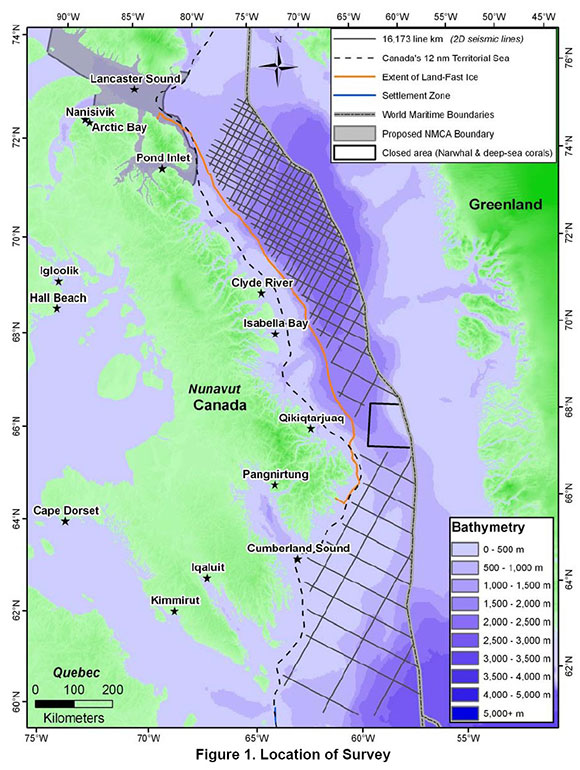 The company has proposed the Project to gain a better understanding of the offshore geology in Baffin Bay and Davis Strait and determine the regional extent of geological formations. The company believes a high-quality modern regional data set is required to compliment historic data. The results of the survey may be used to inform new exploration activities.

3. COMMENTS FROM THE PUBLIC

The company has been discussing the Project with the communities of Iqaluit, Clyde River, Pond Inlet, Qikiqtarjuaq, Pangnirtung, and Kimmirut from January 2011 to the present day. The NEB received letters of comment from the following organizations: the Qikiqtani Inuit Association, Environment Canada, the Arctic Fisheries Alliance, the Baffin Fisheries Coalition, Fisheries and Oceans Canada and the Government of Nunavut. Letters were also received from Shari Gearheard on behalf of Clyde River residents. Issues and concerns raised related to:

The NEB will take these issues into consideration in its environmental assessment and decision-making, to the extent that they are relevant to the Project and within the NEB’s regulatory mandate under COGOA.

The noise generated by the air guns during seismic operations has the potential to result in the following effects:

The company has proposed various measures to mitigate the impacts of potential environmental effects from the Project.

5.1 Mitigation Measures for the Effects of Seismic Operations on Marine Mammals, Fish and Invertebrates

5.2. Mitigation Measures for Potential Changes to Traditional and Commercial Harvesting

5.3 Mitigation Measures with Respect to Seabirds

5.4 Mitigation Measures for Potential Environmental Effects to Air and Water Quality and Effects related to Accidents and Malfunctions

The NEB is interested in hearing your comments on issues relevant to this Project, particularly the potential environmental effects and mitigation measures outlined in this paper. For example, are there additional impacts not already identified, or is there additional mitigation you can suggest? Comments from the public must be submitted in writing by 3 May 2013 by Email at ExproEA@cer-rec.gc.ca or by mail to the National Energy Board, 444 Seventh Avenue SW, Calgary Alberta  T2P 0X8, Attention: Team Leader Conservation of Resources.

This paper will also guide discussions at community meetings where oral comments will be heard. Community meetings will be conducted in April and May 2013 in Iqaluit, Pond Inlet, Clyde River and Qikitarjuaq. Please contact the Regulatory Officer, Danielle Comte at 403-299-2731 or toll free at 1-800-899-1265 for further information regarding the community meetings.

Under section 15 of the National Energy Board Act, the NEB authorized Board Member David Hamilton to report and make recommendations to the NEB about the Project application. Written comments from the public and information gathered from community meetings will inform Mr. Hamilton’s report and recommendations to the NEB. The NEB will then decide whether to approve or deny the Project application.

We look forward to your participation.

Airgun: An airgun is a specialized sound source that creates underwater sound by releasing a burst of compressed air into the water at great speed. During seismic operations airguns are towed in arrays of several airguns. The airguns are fired simultaneously to generate enough sound for geophysical measurements.

Ballast Water: Refers to water held in tanks on ships to increase stability and maneuverability of the ship during transit. Ballast water may be taken on or released depending on the amount or weight of the ship’s cargo or during changing sea conditions.

Bilge water: This is water that collects in the lowest point of a ships hull. Most bilge systems are designed to keep the decks clear of accumulated water during wet weather.

Decibel (dB): A decibel is used to quantify sound levels and is a logarithmic scale rather than a linear scale. The human and marine mammal sense of hearing is also logarithmic so decibels are used for sound measurement. For example 0-20 dB is very faint and 90-100 dB is very loud.

Masking: When a sound is masked it is not possible to hear it because another louder sound is covering up the particular sound. For example, it is difficult to hear someone talking when you are on a snowmobile because the engine noise masks the speaker’s voice.

National Marine Conservation Area: Marine areas managed for sustainable use and containing zones of high protection. They include the seabed, the water above it and any species which occur there. They may also take in wetlands, estuaries, islands and other coastal areas. They are designated by Parks Canada.

Streamer: Solid cables that are towed 5-10 m below the surface of the water and contain the hydrophones.

The Statement of Canadian Practice with respect to the Mitigation of Seismic Sound in the Marine Environment specifies the mitigation requirements that must be met during the planning and conduct of marine seismic surveys, in order to minimize impacts on life in the oceans. These requirements are set out as minimum standards, which will apply in all non-ice covered marine waters in Canada. The Statement complements existing environmental assessment processes, including those set out in settled land claims. The current regulatory system will continue to address protection of the health and safety of offshore workers and ensure that seismic activities are respectful of interactions with other ocean users.

Critical habitat: means the habitat that is necessary for the survival or recovery of a listed wildlife species and that is identified as the species' critical habitat in the recovery strategy or in an action plan for the species.

Marine Mammal Observer: means an individual trained to identity different species of marine mammals and turtles that may reasonably be expected to be present in the area where the seismic survey will take place.

Passive Acoustic Monitoring: means a technology that may be used to detect the subsea presence of vocalizing cetaceans.

Ramp-up: means the gradual increase in emitted sound levels from a seismic air source array by systematically turning on the full complement of an array’s air sources over a period of time.

Seismic air source: means an air source that is used to generate acoustic waves in a seismic survey.

Seismic air source array(s): means one or a series of devices designed to release compressed air into the water column in order to create an acoustical energy pulse to penetrate the seafloor.

Seismic survey: means a geophysical operation that uses a seismic air source to generate acoustic waves that propagate through the earth, are reflected from or refracted along subsurface layers of the earth, and are subsequently recorded.

“Statement”: means the Statement of Canadian Practice for the Mitigation of Seismic Sound in the Marine Environment.

Whale: means a cetacean that is not a dolphin or porpoise.