In its application, which was filed on 8 August 2011 under section 58 of the National Energy Board Act, Enbridge is asking the NEB to approve the additions and modifications required to allow the reversal of crude oil flow within a segment of Line 9 - a 762-millimetre (30 inches) outside diameter crude oil pipeline - from the Sarnia Terminal to the North Westover Station in southwestern Ontario.

All proposed work would take place on existing Enbridge facilities and surface leases, with no planned ground disturbance along the pipeline right-of-way.

The shift in flow direction from west to east would see the pipeline revert back to the direction that was originally approved in 1975. The current westward flow has been in place since 1999. 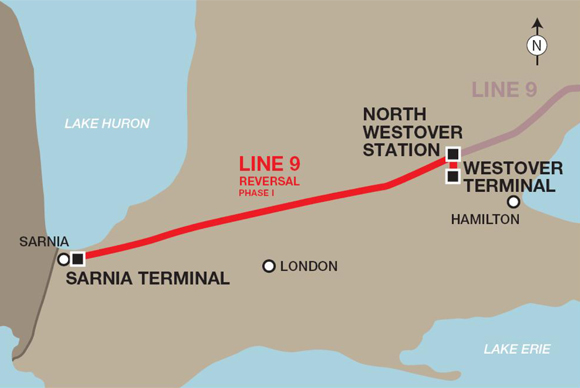 The oral portion of the hearing was completed on 24 May 2012. The record for the proceeding is now closed and the Board has released its decision: Letter Decision OH-005-2012 [Filing A43137].

Printed copies of the publications listed below can also be ordered from the NEB Library by calling 403-299-3561 or (toll free) 1-800-899-1265, by sending an e-mail to publications@cer-rec.gc.ca or by filling out the online contact form.

The NEB has assigned a Process Advisor for this project. The Process Advisor’s role is to support the public (e.g., landowners, concerned citizens, environmental non-governmental organizations) and Aboriginal groups who are participating in public hearings.

The NEB is making available $165,000 under its Participant Funding Program to assist landowners, Aboriginal groups, incorporated non-industry not-for-profit organizations, and other interested parties to participate in the regulatory process for the proposed project.

The deadline to submit a funding application is now passed.

The National Energy Board (Board) has identified but does not limit itself to the following issues for discussion in this hearing:

The period to file Letters of Comment is now closed.