On this page you can find:

On 20 August 2015 the National Energy Board (NEB) received a request from Imperial Oil Resources Ventures Limited (IORVL), on behalf of the Mackenzie Valley Pipeline (MVP) proponents and the Mackenzie Gathering System (MGS) proponents to extend the sunset clauses for the approvals for the MVP and the MGS from 31 December 2015 to 31 December 2022 [Filing A72326]. The existing sunset clause for the MVP states:

The MGS has a similar existing sunset clause and expiry date of 31 December 2015.

IORVL made a similar extension request dated 29 October 2015 to the Office of the Regulator of Oil and Gas Operations (OROGO) for the portion of the MGS located outside of the Inuvialuit Settlement Region (ISR).

In October 2004, IORVL and its partners submitted applications to the NEB for the project that came to be known as the Mackenzie Gas Project.

On 16 December 2010 the NEB issued the Reasons for Decision (RFD) for the approval of the MGP which included five approvals. The RFD is available in two volumes on the NEB’s website [Filing A27695].

This map provides an overview of the MGP and identifies both the NEB and the OROGO regulatory jurisdictions. 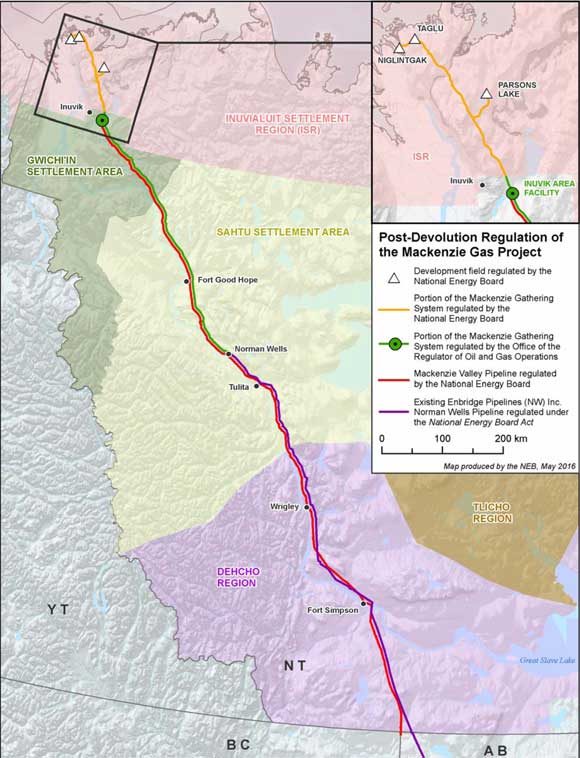 The NEB and the OROGO CCO are each considering whether to approve IORVL’s applications to extend the sunset clauses, and will accept written comments with respect to the proposed extensions until 16 February 2016.

Both regulators will rely on the NEB’s public registry and e-filing system to gather written comments relevant to their respective statutory mandates, which will be considered in reaching a decision on the proposed extensions. Written comments can be made through the following:

The NEB and OROGO may release periodic email updates to keep you informed of the latest developments in the proceeding.

You can sign up to receive email updates about the Mackenzie Gas Project - Request for Extension to Sunset Clause process here: MGPprocesshelp@cer-rec.gc.ca

The OROGO decisions and other relevant documents filed with the OROGO will be placed on the OROGO Public Registry. These documents are all accessible to the public.

For review process and media inquiries: